Turkey vows to put on trial all, including Saudi officials, tied to Khashoggi case

Rasa - An advisor to Turkey’s president has vowed that the country will prosecute all those involved in the suspected kidnapping or murder of a dissident Saudi journalist in Riyadh’s consulate in Istanbul, even if it involves the Saudi consul himself. 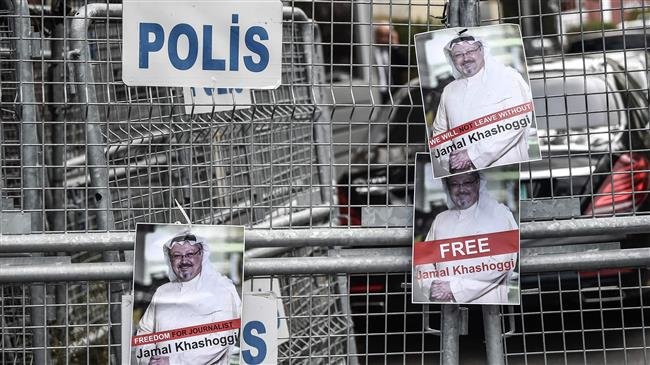 RNA - Yasin Aktay made the comments to the Palestinian Shehab news agency on Tuesday, adding, “Turkey is a state of law and prosecutes anyone who commits crimes in its territory.”

“This will be a file between Saudi Arabia and us,” the Turkish official warned.

On Friday, Saudi Crown Prince Mohammed bin Salman said Turkey could search the consulate for the missing dissident. He claimed that Khashoggi had left the building not long after he entered earlier this week. “If he’s in Saudi Arabia, I would know that.”

Turkish President Recep Tayyip Erdogan has said that Saudi officials must prove that Khashoggi had indeed left the mission.

He also complained that the Saudi consulate and authorities had ignored Turkish contacts following the disappearance of Khashoggi.

“As if the Saudi authorities were asleep and there was a strange silence at a time when the news of Khashoggi’s disappearance was spread in the world,” he noted.

Meanwhile, the head of the Turkish-Arab Media Association in Turkey, Turan Kislakci has told Shebab that Turkish officials had assured him of Khashoggi having been brutally murdered inside the consulate.

Aktay further said, “To insult the man who comes to the consulate and kill him at your home is one of the worst acts and gravest sins.”

’Mysterious boxes taken out of consulate’

On Monday, London-based Al-Quds Al-Arabi paper said Turkish investigators looking at footage from security cameras at the consulate saw men taking some boxes from the building to a black car following the disappearance.

It said Turkish officials had accused Saudi authorities of killing the 59-year-old inside the facility using a special force sent from Riyadh.

Saudi Consul General, Mohammed al-Otaibi, however, invited journalists into the building on Saturday to try to prove that Khashoggi was not there, saying reports of his detention were false.

In a statement, the Saudi Foreign Ministry reacted to one such report “published in one of the websites” as “totally baseless and false.”

Also on Tuesday, the United Nations voiced deep concern over the reports about Khashoggi, urging Turkey and Saudi Arabia to investigate the matter.

“Yes, this is of serious concern, the apparent enforced disappearance of Mr Khashoggi from the Saudi consulate in Istanbul,” UN human rights spokeswoman Ravina Shamdasani told a Geneva news briefing.

“If reports of his death and the extraordinary circumstances leading up to it are true, this is truly shocking,” she added. “We call for cooperation between Turkey and Saudi Arabia to conduct a prompt and impartial investigation into the circumstances of Mr Khashoggi's disappearance and to make the findings public.”

The countries are mandated to do so under both criminal law and international human rights law, Shamdasani noted.

Turkey: Consulate to be searched

Shortly afterwards, Turkish Foreign Ministry spokesman Hami Aksoy said in a written statement that although the Vienna convention says consulate buildings enjoy immunity, they can be searched by host country authorities with the consent of the mission chief.

“The consulate building will be searched in the framework of the investigation,” the statement said, noting that an investigation focusing on Khashoggi was “continuing intensively.”

Tags: Turkey Saudi
Short Link rasanews.ir/201qhn
Share
0
Please type in your comments in English.
The comments that contain insults or libel to individuals, ethnicities, or contradictions with the laws of the country and religious teachings will not be disclosed