Rasa - Iranian Ambassador to Baghdad Iraj Masjedi congratulated the Iraqi speaker, president and prime minister for their election, stressing his country's continued support for Iraq after the formation of the new government. 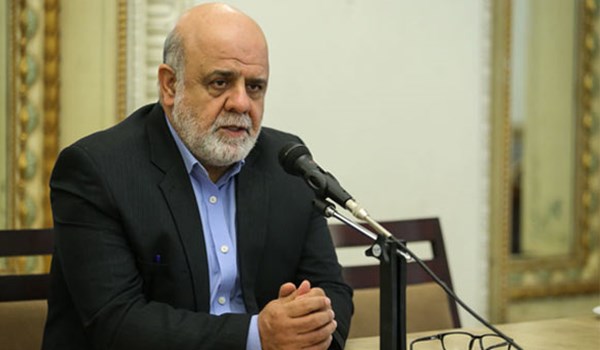 RNA - "Relations between the two countries are strategic, and Iran and Iraq are two highly important neighbors in the region. Iran will continue its full support for the new Iraqi government," Masjedi said on Sunday.

He expressed confidence that political, economic, cultural, social, scientific and academic relations between Tehran and Baghdad would further expand in the future, adding that the traffic of both countries' pilgrims will also increase.

According to Fars News Agancy, Iraq announced last month that it had officially removed the US dollar in trade with Iran by declaring a legal limit for passengers to carry along euros and not dollars into the Islamic Republic.

Tags: Iraj Masjedi Iraq
Short Link rasanews.ir/201qhR
Share
0
Please type in your comments in English.
The comments that contain insults or libel to individuals, ethnicities, or contradictions with the laws of the country and religious teachings will not be disclosed