Rasa - People have in recent days taken to the streets of different Yemeni cities to vent their outrage at Saudi Arabia that has waged a multiple-year deadly war on the country and caused one of the worst humanitarian crises of modern history there. 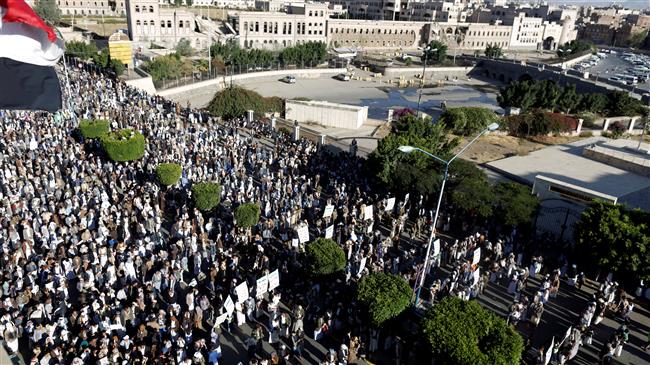 RNA - Yemenis held anti-Saudi protests in the capital, Sana'a, and the southwestern city of Ta'izz.

Ta'izz was the scene of demonstrations both on Thursday and Friday, with the participants blaming Yemen’s worsening situation on the Saudi-led coalition, which is leading an offensive code-named Operation Decisive Storm on the country since March 2015.

During Thursday' rally, the Yemenis held signs accusing Riyadh of stealing their country's oil and gas resources, urging the regime to open the war-torn state's airports.

"We came out today in mass anger," protester Aida al-Absy said, noting that Saudi Arabia had "started controlling our country's resources. We are calling on the coalition to return the oil and gas, open the airports, and return everything to their legitimate places."

Another protester Shehab Mohamed said, "We are starving and our children are dying. The cities are under siege and there's unemployment."

During Friday's demonstration in Ta'izz, the demonstrators carried banners condemning the ongoing Saudi occupation of Yemen.

"In March 2015, the Saudis promised that they would recapture the whole country in two weeks, but they haven’t been able to do it in more than three years. Instead, they led the country towards famine," he said. "We demand them to leave our country and we will manage our wealth ourselves."

"Yemenis are starving to death because of the increase of basic commodities’ prices, while the Saudis are enjoying their life and they have not rescued the Yemenis from famine," he added.

Essam al-Sharjabi, another protester, told the MEE that the Yemenis should continue protests to end the Saudi military campaign.

"Saudi Arabia looks out for its interests and it is not willing to help Yemenis because the Saudis will not get any benefit from such a humanitarian attitude," Sharjabi pointed out.

Saudi Arabia and its allies launched the brutal war against Yemen in an attempt to reinstall the country's former Riyadh-allied regime and crush the Houthi Ansarullah movement.

The Western-backed imposed war, however, has so far failed to achieve its stated goals, thanks to stiff resistance from Yemeni troops and allied Houthi fighters.

The blockade on Yemen has smothered humanitarian deliveries of food and medicine to the import-dependent state and led to a humanitarian crisis and an outbreak of cholera.

Separately on Friday, Yemeni protesters poured onto the streets of Sana'a to denounce the Saudi aggression and the deteriorating economic conditions.

Houthi officials were among the participants in the event, where they vowed to resist the Saudi war and conduct retaliatory attacks.

According to Press TV, Yemenis "came out today to tell the whole world that we will not accept to die of hunger or under siege, but these things increase our determination to die on the honorable fronts in the face of the invading conquerors, in the face of those trying to kill us with hunger, militarily and from the air," he added.

Mohammed Heeda, another Houthi official, stressed that the Yemeni fighters would liberate their homeland from "the Saudi-American-Zionist injustice and control."

Tags: Yemen Saudi Houthi
Short Link rasanews.ir/201qh0
Share
0
Please type in your comments in English.
The comments that contain insults or libel to individuals, ethnicities, or contradictions with the laws of the country and religious teachings will not be disclosed