Iran says US termination of Amity pact sign of 'anger'

Rasa - An Iranian envoy says the US cancelled a 1950s pact with the country out of outrage at an earlier UN court verdict in favor of the Islamic Republic. 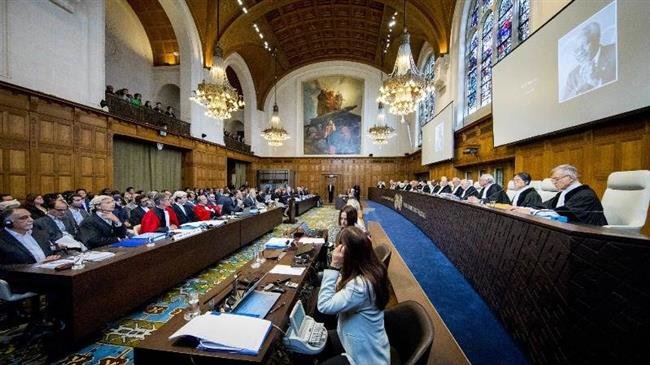 RNA - “Why some Americans are angry about the Court’s order and immediately announce termination of the longstanding Treaty between the two countries if it is a 'narrow decision' and 'a defeat for Iran," Iran’s Ambassador to the Netherlands Alireza Jahangiri wrote in a tweet message on Thursday in reference to reactions by US officials toward a ruling by the International Court of Justice (ICJ) that ordered Washington to lift sanctions against Iran that it said were hurting ordinary Iranians.

Why some Americans are angry about the Court’s order & immediately announce termination of the longstanding Treaty between the two countries if it is a “narrow decision” & “a defeat for #Iran”. As we say in persian رنگ رخسار خبر ميدهد از سر درون. It is written all over your face
— Dr Alireza Jahangiri (@jahangiri_ir) October 4, 2018

In response to ICJ's ruling, Washington quickly cancelled the 1955 Treaty of Amity with Iran which had established economic relations and consular rights between Tehran and Washington at the time it was signed between the countries.

The ruling came in response to a lawsuit filed by Iran over America's withdrawal from the 2015 nuclear deal with the Islamic Republic and its re-introduction of the sanctions that had been lifted under the deal - the Joint Comprehensive Plan of Action (JCPOA). The ICJ - UN's highest court - accordingly ordered Washington to halt the unilateral sanctions it has re-imposed on "humanitarian" exports to the Islamic Republic.

According to the verdict, which was read out by Judge Abdulqawi Ahmed Yusuf, Washington "shall remove by means of its choosing any impediments arising from the measures announced on May 8 to the free exportation to Iran of medicines and medical devices, food and agricultural commodities" as well as airplane parts.

US Ambassador to the Netherlands Pete Hoekstra described the Wednesday verdict as “a narrow decision on a very limited range of sectors,” while Secretary of State Mike Pompeo said, "The court's ruling today was a defeat for Iran. It rightly rejected all of Iran's baseless requests."

Tehran, however, welcomed the ruling by the 15-member panel of justices, saying it once again indicted Iran's “righteous” position against the hostile US policies. Foreign Minister Mohammed Javad Zarif described the verdict as yet another defeat for the “sanctions-addicted” US government.

“It is written all over your face,” Jahangiri also said, suggesting that Washington’s resentment at the verdict was already visible.

According to Press TV, Iran filed the complaint with the ICJ -- the principal judicial organ of the United Nations -- in July after US President Donald Trump announced that he would withdraw the US from the 2015 nuclear deal with Iran.

The agreement, which followed marathon talks, lifted nuclear-related sanctions against Iran which in turn agreed to implement certain restrictions in its nuclear energy activities.

The UN and the European Union, which coordinated the talks that led to the deal, as well as all the agreement’s other signatories -- the UK, France, Russia, China, and Germany -- have all hailed it as an example of successful diplomacy.

Tags: US Iran
Short Link rasanews.ir/201qgY
Share
0
Please type in your comments in English.
The comments that contain insults or libel to individuals, ethnicities, or contradictions with the laws of the country and religious teachings will not be disclosed