Rasa - The son of one of Bahrain’s most prominent political prisoners has ended his hunger strike outside the Bahraini embassy in London after 15 British MPs agreed to take up his father’s case. 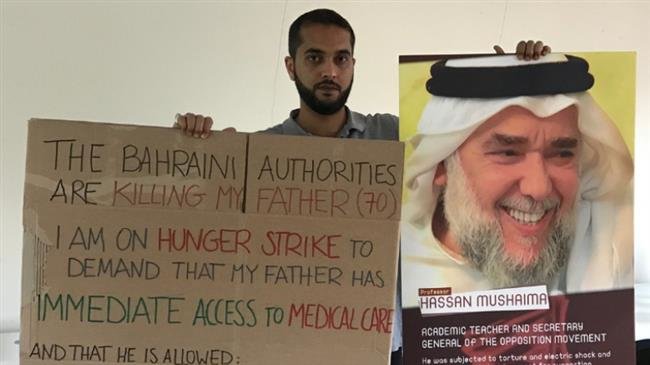 RNA - Ali Mushaima, the exiled son of Bahraini opposition leader Hassan Mushaima, said after ending his hunger strike on Thursday that he is glad to be home with his family after 64 days sleeping rough on the pavement outside the Bahraini embassy in London.

He dedicated the last night of his hunger strike to all Bahraini political prisoners.

Ali Mushaima decided to end his strike after 15 British MPs wrote a letter to Foreign Secretary Jeremy Hunt demanding that he “condemn the appalling treatment of Hassan Mushaima … a prisoner of conscience that is being denied basic human rights.”

Former Bahraini MP Hassan Mushaima is languishing in one of Bahrain’s most notorious prisons. He was in the United Kingdom for medical reasons when the Bahraini revolution happened in 2011. But when he returned to the country he was arrested three weeks later along with 500 others as part of a sweeping crackdown. He was accused of trying to overthrow the regime and was sentenced to life in prison.

Hassan Mushaima’s family say he has been tortured in jail and has endured four surgical operations as a result. He has survived lung cancer but suffers from high blood pressure, diabetes, gout and a urinary infection, all of which he needs medication for.

His supporters say he should be getting cancer scans every six months but only one has been conducted recently, the results of which are taking weeks to come through. The Bahraini regime is also being urged to return Hassan Mushaima’s books which are his “mental lifeline.”

Human Rights Watch has verified that medical care has been withheld from the 70-year-old. His case has also been taken up by Amnesty International.

“That anyone can bring themselves to treat people with such cruelty is unbelievable,” said Lynn Maalouf, the organization’s Middle East Research Director, adding, “[He] should not have been arrested, tried or imprisoned in the first place... [He] must be released immediately and unconditionally.”

He went 46 days of his embassy protest without food to demand adequate medical care for his father and family visits. He added that the Bahraini regime is trying to kill his father slowly by denying him adequate care.

According to Press TV, Ali Mushaima’s latest attempt at publicizing his father’s story also targeted the British government because London’s arms sales to Bahrain are substantial.

Andrew Smith, a spokesperson for Campaign Against Arms Trade, confirmed this at a press conference marking Ali Muishaima’s last day on hunger strike. He said Bahrain had been armed and supported every step of the way by the UK government.

Since the Bahraini uprising began in 2011, the UK has licensed over £80 million worth of arms to the regime, and has also provided a great deal of political support.

Ali Mushaima says he has been under severe emotional pressure as the son of a tortured pro-independence activist and a father himself. His wife and daughter visited him every day of his strike, sitting with him on his makeshift bed.

Tags: London bahrain
Short Link rasanews.ir/201qgU
Share
0
Please type in your comments in English.
The comments that contain insults or libel to individuals, ethnicities, or contradictions with the laws of the country and religious teachings will not be disclosed