Iran will slap US in face by defeating sanctions: Ayatollah Khamenei

Rasa - Leader of the Islamic Revolution Ayatollah Seyyed Ali Khamenei says American sanctions are “more fragile than” Iran’s economy, emphasizing that the Iranian nation will “slap the US in the face” by defeating those bans​​​​, once again. 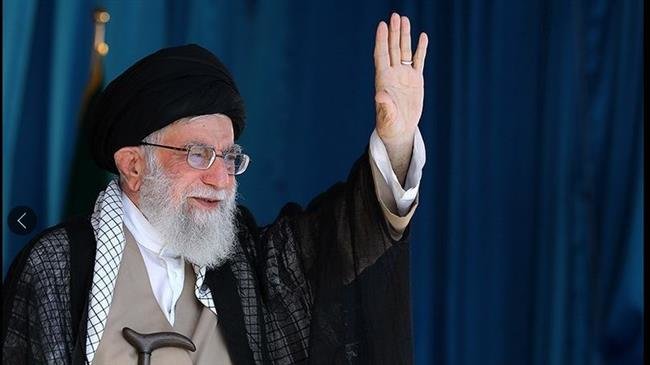 RNA - Leader of the Islamic Revolution Ayatollah Seyyed Ali Khamenei says American sanctions are “more fragile than” Iran’s economy, emphasizing that the Iranian nation will “slap the US in the face” by defeating those bans​​​​, once again.

Ayatollah Khamenei made the remarks during a speech to a large gathering of Iran’s Basij volunteer forces and senior military officials at the Azadi Stadium in the capital, Tehran, which has a capacity of 100,000 people.

“Following vast explorations, the enemy has arrived at sanctions [as a solution] to counter the Islamic Republic. It has no other solution but economic sanctions. Other paths in front of it are blocked,” said Ayatollah Khamenei, stressing, however, that “economic sanctions are more fragile than our national economy.”

“Our national economy can defeat sanctions,” said the Leader. “The defeat of sanctions will be America’s defeat, and the US, with this defeat, should once again be slapped in the face by the Iranian nation, God willing.”

“The enemy wants to bring the Iranian nation to the conclusion that there is a dead end, and that there is no solution except kneeling and giving in to the US,” The Leader said, adding that those promoting such a viewpoint at home are traitors to the country.

Ayatollah Khamenei, however, assured that he “will not allow that to happen in the country” with the help of the nation.

The Leader further said the Iranian nation has been blessed with “invincibility,” which is rooted in its 1979 Islamic Revolution, its eight-year Holy Defense of the country against the ex-Iraqi regime’s war in the following years, and in general, its steadfast resistance over the past 40 years in the face of all enemy plots.

“The grandeur and authority of the Islamic Republic and its invincibility are not empty talk or mere slogans. It is a fact that the enemies seek to keep us ignorant of,” stressed the Leader.

According to Press TV, Ayatollah Khamenei said US President Donald Trump had recently told some European leaders that Iran’s Islamic establishment would be toppled in 2-3 months, adding that such comments are nothing new.

However, almost 40 years into the Revolution, the Islamic Republic has only grown more powerful, the Leader said. “The enemy of the Iranian nation has failed to gain an understanding of the Revolution and the revolutionary spirit; this wrong analysis has misled it [the enemy] in the course of these years.”

The US’s enmity towards the Iranian nation is not merely due to “Death to America” chants, Ayatollah Khamenei said. “They [the Americans] are afraid of Islamic power and the Revolution’s might.”

Ayatollah Khamenei further advised that “both youths and authorities should convey a message of power to the enemy not a message of weakness.”

The enemy, the Leader said, will retreat if it faces national unity, strength and firm determination, and if domestic rifts are set aside.

Tags: US Iran Ayatollah Khamenei
Short Link rasanews.ir/201qgK
Share
0
Please type in your comments in English.
The comments that contain insults or libel to individuals, ethnicities, or contradictions with the laws of the country and religious teachings will not be disclosed