Rasa - Iranian Defense Minister Brigadier General Amir Hatami underlined that a stronger response is waiting for the terrorists and their supporters who carried out the last Saturday attack in Southwestern Iran. 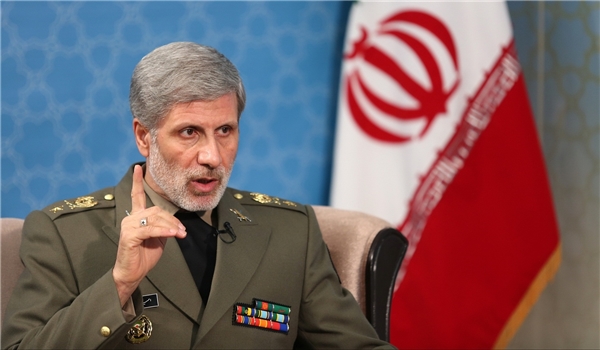 RNA - "The operations was phase one of the response to the terrorists; no one is allowed to damage people's security," General Hatami told reporters in Tehran on Wednesday after a cabinet meeting.

He stressed that the missiles fired at the terrorists' positions in Eastern Syria on Saturday hit the targets with high precision and killed 40 terrorists, based on preliminary reports.

According to Fars News Agency, the IRGC fired 6 ballistic ground-to-ground missiles and launched drone attacks on terrorists' positions in Eastern Euphrates region in Eastern Syria in revenge for the September 22 Takfiri terrorist attacks in Ahwaz city which killed dozens of Iranian people.

In relevant remarks on Tuesday, Commander of the Islamic Revolution Guards Corps Aerospace Force Brigadier General Amir Ali Hajizadeh announced that the IRGC's missile strikes against the terrorist targets in Syria on Monday killed 40 ISIL commanders and smashed all targets.

"In these combined operations, we used drones in addition to missiles and based on images we have received, all targets have been destroyed and the (US-led) coalition forces have not been hurt," General Hajizadeh said.

He added that intelligence showed that nearly 40 ISIL leaders and one of their Iraqi commanders in Mosul were killed in the attack, adding that the corpses of other terrorists were still under the rubbles.

He added that Iran showed rapid reaction to the terrorists' moves but was patient with the governments, noting, "But they are not aware of the threshold of our tolerance and therefore, they should not take the risk."

Tags: Amir Hatami IRGC
Short Link rasanews.ir/201qgJ
Share
0
Please type in your comments in English.
The comments that contain insults or libel to individuals, ethnicities, or contradictions with the laws of the country and religious teachings will not be disclosed