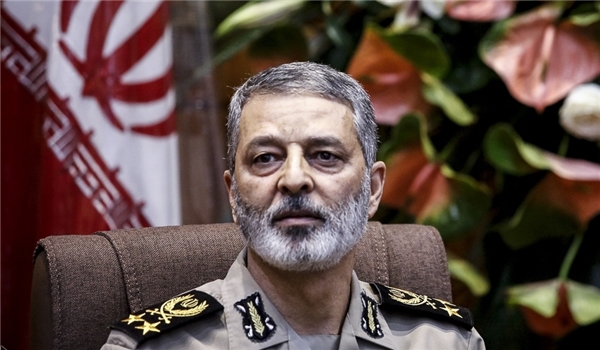 RNA - "We will strike a more powerful and heavier blow in return for any strike by the other side," General Moussavi told reporters in Tehran on Wednesday.

He warned the enemies that Iran's threshold of tolerance is limited and the country's response will grow stronger as it waits longer.

"We can do the strike any time and anywhere," General Moussavi said, warning that Iran's wrath will make aggressors regret their deeds.

One day later, Commander of the IRGC's Aerospace Force Brigadier General Amir Ali Hajizadeh announced that the missile strikes against the terrorist targets in Syria on Monday killed 40 ISIL commanders and smashed all targets.

"In these combined operations, we used drones in addition to missiles and based on images we have received, all targets have been destroyed and the (US-led) coalition forces have not been hurt," General Hajizadeh said on Tuesday.

According to Fars News Agency, he added that intelligence showed that nearly 40 ISIL leaders and one of their Iraqi commanders in Mosul were killed in the attack, adding that the corpses of other terrorists were still under the rubbles.

He added that Iran shows rapid reaction to the terrorists' moves but is patient with the governments, noting, "But they are not aware of the threshold of our tolerance and therefore, they should not take the risk."

Tags: Iran Syria Army
Short Link rasanews.ir/201qgH
Share
0
Please type in your comments in English.
The comments that contain insults or libel to individuals, ethnicities, or contradictions with the laws of the country and religious teachings will not be disclosed