IRGC Commander: Military Option against Iran "Off The Table"

Rasa - A senior commander of the Islamic Revolution Guards Corps (IRGC) underlined the Iranian Armed Forces' deterrence power, and said enemies of the country do not even dare to think of war against Iran. 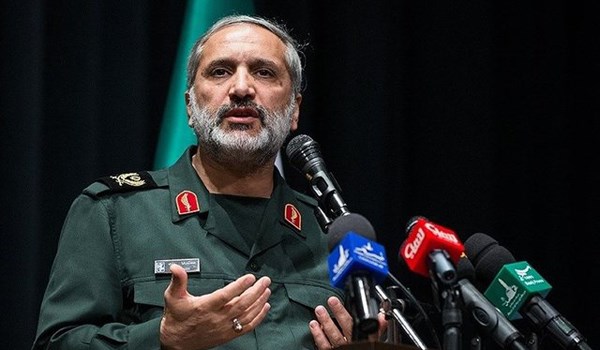 "They (the enemies) lie when they say that the military option is on the table because they do not dare to attack," he added.

In relevant remarks last month, IRGC Lieutenant Commander Brigadier General Hossein Salami underlined that the US will be the loser of any war that it would initiate against Iran due to the preparedness of the country's Armed Forces and lack of an international support for such military confrontation.

"The US military is incapable of engaging us in a battle and the American economy wouldn't be able to support the war either," Salami added.

According to Fars News Agency, he underlined that the US war against Iran is no longer a possibility because Washington lacks the political means and international support to launch a new military campaign.

His remarks came after Supreme Leader of the Islamic Revolution Ayatollah Seyed Ali Khamenei reiterated his August remarks that the chances of a war breaking out against Iran are zero, yet he urged the country's armed forces to enhance their deterrence power.

"Political calculations show that there is no chance for a military war, yet the armed forces are needed to boost their equipment and human capabilities vigilantly and through an efficient and agile management," Ayatollah Khamenei said at a meeting with senior commanders and officials of the Air Defense Base of the Islamic Republic of Iran's army here in Tehran.

The Iranian leader termed the Army's Air Defense Base a very sensitive section of the Iranian Armed Forces that stands at the forefront of confrontation against enemy, and laid emphasis on the need for the enhancement of the capabilities and preparedness of the Air Defense Base.

Tags: IRGC Iran
Short Link rasanews.ir/201qgD
Share
0
Please type in your comments in English.
The comments that contain insults or libel to individuals, ethnicities, or contradictions with the laws of the country and religious teachings will not be disclosed