Rasa - Iranian Foreign Ministry Spokesman Bahram Qassemi announced that the country is in talks with international bodies and several European states to extradite those behind the September 22 terrorist attack in Ahwaz. 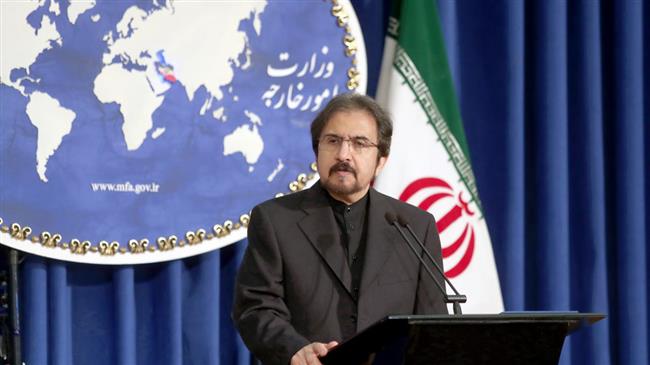 RNA - "All foreign ministry-related moves, including referring to the international bodies and some countries, to extradite the culprits have been adopted. We are determined to pursue this issue very seriously," Qassemi told reporters in a press conference in Tehran on Monday.

He noted that gathering documents on the September 22 attacks and the culprits behind them is still underway, expressing the hope that other countries would show more serious commitment to anti-terrorism efforts.

Iranian authorities summoned ambassadors of the Netherlands and Denmark as well as chargé d'affaires of the British embassy in Tehran after terrorists with links to the European countries carried out attacks during a military parade in the Southwestern city of Ahwaz on September 22.

The terrorists, whose leaders mostly live in the European states, attacked the bystanders watching the annual Armed Forces' parades, marking the start of the Sacred Defense Week, commemorating Iranians' sacrifices during the 8 years of the Iraqi imposed war on Iran in 1980s, in disguise of the Islamic Revolution Guards Corps (IRGC) and Basij (volunteer) forces, killing and wounding several people, including innocent women and children.

None of the officials participating in the military parades in Ahwaz city in Khuzestan province was injured in the attack.

The number of the terrorists who carried out the attack in Ahwaz had on September 22 been put at 4 by Spokesman of the Iranian Armed Forces Brigadier-General Abolfazl Shekarchi. The general had explained that three of them were killed and the last one was captured by security forces.

He said that none of the terrorists could escape, noting that other reports about the details of the attack are not confirmed.

Later the intelligence ministry put the number of terrorists at five, naming them as Ayad Mansouri, Foad Mansouri, Ahmad Mansouri, Javad Sari and Hassan Darvishi who were killed on the scene of the clashes with the Iranian security forces after riddling people with bullets.

Meantime, Head of the Islamic Revolution Guards Corps Public Relations Department and IRGC Spokesman General Ramezan Sharif said that the terrorists who attacked people during the Armed Forces' parades in Ahwaz were affiliated to al-Ahwaziya stream which is nourished by Saudi Arabia.

He added that the terrorists aimed to overshadow the magnificence of the Iranian Armed Forces' parades.

According to Fars News Agency, General Sharif said that people were also invited to watch the parades and the terrorists both fired at people and the Armed Forces.

He said that such attacks were precedent and al-Ahwaziya terrorist group had earlier fired at the convoys of people who visited the Southern cities of Iran which resisted against Saddam's aggression during the 8-year Iraqi-imposed war against Iran in 1980s.

In revenge for the September 22 attack, the IRGC fired 6 ballistic ground-to-ground missiles and launched drone attacks on terrorists' positions in Eastern Euphrates region in Eastern Syria on Monday.

The precision-striking missiles were of Zolfaqar and Qiam classes with ranges of respectively 750km and 800km. At least one of the missiles bore slogans 'Death to America', 'Death to Israel', 'Death to Al Saud' and a Quranic verse meaning 'fight against the friends of Satan'. They travelled over the Iraqi airspace and hit Eastern Euphrates region in Syria.

Also, a few minutes after the missile strikes, 7 IRGC drones targeted the terrorists' positions in the region.

According to reports, heavy damage has been inflicted on the terrorists' infrastructures and positions.

Tags: Ahwaz Bahram Qassemi
Short Link rasanews.ir/201qfd
Share
0
Please type in your comments in English.
The comments that contain insults or libel to individuals, ethnicities, or contradictions with the laws of the country and religious teachings will not be disclosed