Rasa - As the Syrian armed forces are preparing to launch a full-scale offensive to retake the northern province of Idlib, Russia says the Syrian troops have the full right to go after and hunt the terrorists out of the last stronghold of militants. 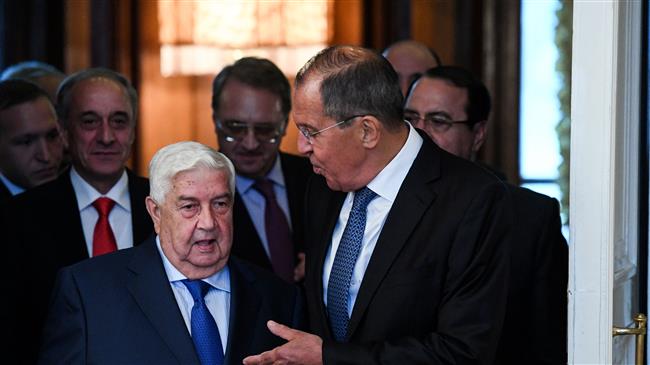 RNA - Russian Foreign Minister Sergei Lavrov said on Friday the Syrian army has every right “to protect its sovereignty and to drive out, liquidate the terrorist threat on its territory.”

He also noted that talks were underway to set up humanitarian corridors in the militant-held province.

"In this area, in this de-escalation zone, there must be a separation of the armed opposition, ready for dialogue with the government, from terrorists of Jabhat al-Nusra [now known as Tahrir al-Sham] and other organizations recognized as terrorist by the UN Security Council. Terrorists oppose such separation," Lavrov noted.

On Wednesday, Lavrov had described the Idlib-based militants as a “festering abscess” which must be liquidated, RIA news agency reported.

The Syrian army’s large-scale operation will be aimed at retaking a province of three million population.

UN’s Special Envoy to Syria Staffan de Mistura said Thursday the UN estimates put the number of terrorists remaining in Idlib province at 10,000, stressing that they must be defeated.

According to Press TV, De Mistura admitted that the terrorists in Idlib may use chemical weapons during the Syrian army’s operation, echoing a concern earlier raised by Russia, which warned the terrorists may launch the chemical attack to frame the Syrian government, giving Western powers a pretext to launch a new raid on Syria.

While the Syrian army is getting prepared for the operation, Idlib-based militants reportedly blew up two key bridges in an attempt to slow down the government’s attack, the UK-based Syrian Observatory for Human Rights said Friday.

The bridges over the Orontes River linked Idlib to areas of neighboring Hama province, which is controlled by the government of President Bashar al-Assad.

"They were the two main bridges in the area, but there are others," Observatory head Rami Abdel Rahman told AFP.

The bridges, which were located in the Al-Ghab plain, could be one of the first targets of any offensive by the Syrian army.

Tags: Idlib Syria Russia
Short Link rasanews.ir/201qHw
Share
0
Please type in your comments in English.
The comments that contain insults or libel to individuals, ethnicities, or contradictions with the laws of the country and religious teachings will not be disclosed