Some 10,000 Al-Nusra, Al-Qaeda Terrorists in Idlib 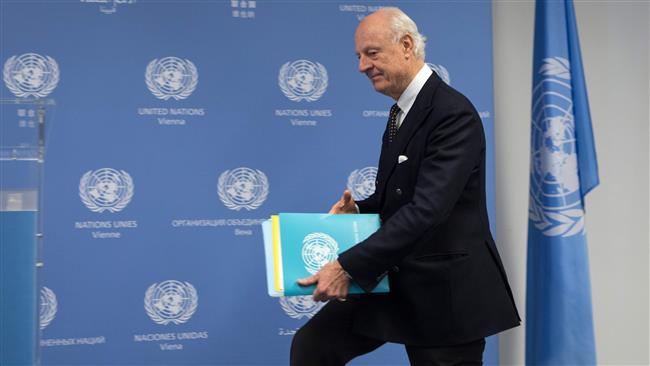 RNA - “No one doubts… that al-Nusra and al-Qaeda are terrorists and that terrorists identified by the UN need to be defeated… Indeed, the estimates of the al-Qaeda, al-Nusra, whatever name they want to call themselves, are more of less around 10,000 of them plus families,” de Mistura told reporters, Sputnik reported.

He also expressed his readiness to cooperate with the Syrian government to ensure the safe evacuation of civilians from the Idlib province.

“I am once again prepared, personally and physically, to get involved… with the government cooperation… to ensure such temporary [humanitarian] corridors would be feasible and guaranteed for the people so they can then return to their own places untouched,” the UN Special Envoy added.

Idlib province is one of Syria’s de-escalation zones and a remaining stronghold of insurgency in the war-torn country.

Tags: de Mistura Al-Nusra Terrorist Syria Al-Qaeda
Short Link rasanews.ir/201qHr
Share
0
Please type in your comments in English.
The comments that contain insults or libel to individuals, ethnicities, or contradictions with the laws of the country and religious teachings will not be disclosed