Rasa - A London-based Bahraini anti-regime activist has been hospitalized a month into his hunger strike in protest against the failure by Manama to provide treatment to his cancer-stricken father - a dissident jailed in Bahrain. 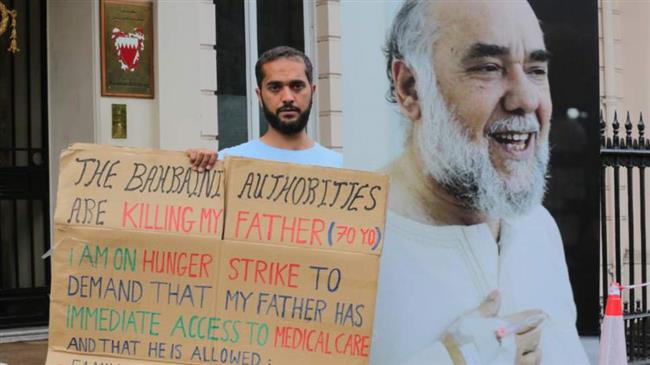 RNA - Ali Mushaima was taken to St Thomas’s Hospital in London's Westminster after lapsing into critical condition during the hunger strike which he had been staging in front of the Bahraini Embassy since early August.

“Ali’s blood sugar dropped significantly, along with his sugar levels, while his heartbeat increased quite rapidly,” Sam Walton, an anti-war activist, who has been supporting Mushaima, told the Middle East Eye (MEE) news portal.

“He was just lying on his bed lifeless all day yesterday. We got worried about him and called a doctor to assess Ali’s condition. It was only after examining him when the doctor said he was concerned for Ali’s health,” Walton added.

According to Press TV, Ali came to Britain as a political refugee in 2006 after being sentenced to 45 years in jail in his home country and having his Bahraini citizenship revoked for anti-regime activism. His 70-year-old father, Hassan, is serving a life term for “leading anti-government protests in 2011,” the MEE said.

Describing Hassan’s condition, Ali said his father has been forced to walk in chains and shackles to receive treatment.

“Rather than giving him his medication inside his cell, the Bahrainis are making him walk to a counter for his medicine in his uniform," Ali said, adding, “He is an old man, and they are trying to use any excuse to humiliate him and break him down."

“They are killing my father slowly. He is 70 years old and by denying medicine and books they are trying to break him down bit by bit,” he said.

Ali has called the authorities in Manama “shameless,” adding that he would continue his hunger strike until his demands were met.

The Persian Gulf kingdom has been coming down hard on peaceful anti-regime rallies since 2011, when the public came out en masse in protest against its ill-treatment of and oppressive policies against the country’s Shia majority.

Scores have died during the crackdown which Bahrain has been carrying out by using the support of its regional allies Saudi Arabia and the United Arab Emirates. Hundreds have also been jailed, tortured, and stripped of their citizenship.

Tags: Manama bahrain
Short Link rasanews.ir/201qHm
Share
0
Please type in your comments in English.
The comments that contain insults or libel to individuals, ethnicities, or contradictions with the laws of the country and religious teachings will not be disclosed