Rasa - Qatar's envoy to the US attacks Saudi Arabia and the United Arab Emirates (UAE) over revelations about their secret dealings with al-Qaeda extremists in Yemen, saying the duo is putting regional peace at risk by allowing the Takfiri terror group to "flourish" in the war-torn country. 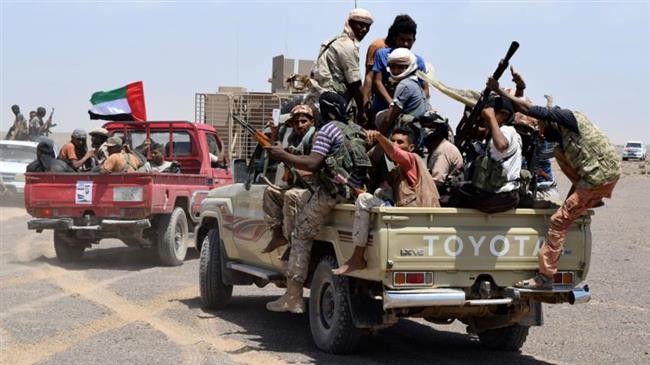 RNA - In an opinion piece published by The Washington Post on Wednesday, Sheikh Meshal bin Hamad Al Thani said Riyadh and Abu Dhabi are busy cutting deals with al-Qaeda terrorists operating in Yemen instead of making efforts to restore peace to the Arabian Peninsula state and end the humanitarian crisis of their own making there.

"We should be engaging in dialogue to find a political solution in Yemen. Instead, our neighbors have chosen to turn their backs on the region, letting extremists flourish in an already fragile state. Our collective goal in the Middle East is to counter terrorism, but our neighbors have different priorities," said Sheikh Meshal.

The senior Qatari diplomat based his remarks on an investigation by the Associated Press, which blew the lid off the secret collaboration between the Saudi-led coalition waging war on Yemen and the al-Qaeda terrorists active there.

The AP study found that "the coalition cut secret deals with al-Qaeda fighters, paying some to leave key cities and towns and letting others retreat with weapons, equipment and wads of looted cash," while "hundreds more were recruited to join the coalition itself."

Sheikh Meshal further highlighted the Saudi and the UAE background of supporting extremism at home, noting that this was a policy, which had a backlash as it paved the way for the terrorists to boost their terror campaign beyond those countries and hit the US with terror attacks in September 2001.

"Saudi Arabia and the UAE tried to ignore radicalization within their own borders in the late 1990s and early 2000s. The result was Osama bin Laden’s attacks against American embassies and the USS Cole," he wrote, adding, "Nearly all the 9/11 hijackers came from Saudi Arabia or the UAE."

"There is no option to sweep radicals under the rug," he added, emphasizing, "Recent history proves that radicalized extremists who are allowed to fester cause more harm than if they are dealt with swiftly and directly."

He further criticized Riyadh and Abu Dhabi for applying the very same policy to Yemen, where they have been leading a bloody military campaign for over three years in support of a former Saudi-friendly government.

"For now, we must pose urgent questions to the UAE and Saudi Arabia: How can they in good faith give arms, safe passage and financing to terrorists? What are the terrorist groups doing with all of these funds and weapons?" asked the Qatari official.

"And most importantly, what will they do to end the humanitarian crisis they created in a way that does not foster another generation of radicalized terrorists?" he continued.

The Qatari envoy's remarks come amid a severe diplomatic crisis unfolding between Doha and a Saudi-led quartet of states.

According to Press TV, the Saudi regime and three of its vassal states -- the UAE, Bahrain and Egypt -- abruptly cut ties with Doha last year and targeted the Persian Gulf state with an all-out economic blockade, accusing it of supporting terrorism, among other things. Doha rejects those allegations as baseless.

In the opinion piece, the Qatari official especially criticized the UAE for leveling terror support allegations against his country, while pursing "its own expansionist ambition in Yemen and the Horn of Africa at the expense of regional security."

"It is rather ironic that while working with al-Qaeda in Yemen, the UAE has been relentlessly demonizing Qatar," said Sheikh Meshal.

The UAE has been playing a key role in both the Saudi-led war on Yemen and campaign against Qatar.

The piece was published a day after Qatari Foreign Minister took to Twitter to voice Doha's concerns over a UN report on the crimes being perpetrated by Saudi Arabia and its allies in Yemen.

"The United Nations report on Yemen is a cause for concern. To renounce violence and war crimes is a moral and humanitarian duty," said the top diplomat, calling on all parties to the conflict to "put Yemenis at the forefront and start a dialogue that includes all sections of the Yemeni people without exception."

Tags: UAE Yemen Qatar Saudi Al-Qaeda
Short Link rasanews.ir/201qHb
Share
0
Please type in your comments in English.
The comments that contain insults or libel to individuals, ethnicities, or contradictions with the laws of the country and religious teachings will not be disclosed