Rasa - The UN Secretary General has voiced deep concerns after a UN report showed that Myanmar's military engaged in mass killings and gang rapes of Muslim Rohingya with "genocidal intent." 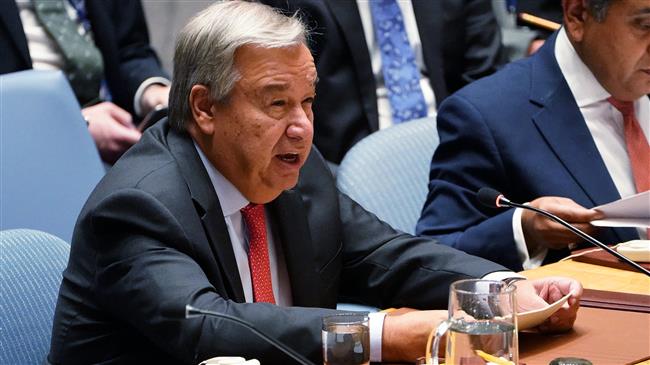 RNA - On Tuesday, Antonio Guterres told a UNSC meeting that the report showed "patterns of gross human rights violations and abuses' committed by the security forces, which it said 'undoubtedly amount to the gravest crimes under international law.'"

On Monday, a UN report called for prosecution of Myanmar's army chief and five other top military commanders for genocide against the country’s Rohingya Muslim minority.

"I believe this report's findings and recommendations deserve serious consideration by all relevant United Nations bodies," he added.

The UN chief  further stressed the international cooperation would "be critical to ensuring that accountability mechanisms are credible, transparent, impartial, independent and comply with Myanmar’s obligations under international law."

According to Press TV, he further noted that there are still no clear conditions for Rohingya refugees to return to their homes.

"There can be no excuse for delaying the search for dignified solutions that will allow people to return to their areas of origin in safety and dignity, in line with international standards and human rights," he said.

In recent months, Myanmar’s armed forces joined by Buddhist mobs have been engaged in a campaign of terror against Muslim families living in Rakhine, killing them, torching their houses and forcing hundreds of thousands of them to flee.

Many have settled in camps in neighboring Bangladesh. Thousands remain on a stretch of land known as the no-man’s-land between Myanmar and Bangladesh.

Some 700,000 Rohingya have been driven into neighboring Bangladesh since last August by the army crackdown.

The United Nations has said it has strong suspicions that “acts of genocide” have taken place against the Rohingya.

Tags: Rohingya UN
Short Link rasanews.ir/201qHC
Share
0
Please type in your comments in English.
The comments that contain insults or libel to individuals, ethnicities, or contradictions with the laws of the country and religious teachings will not be disclosed