Saudi Arabia and Coalition Partners Must Apologize to Yemeni People

Rasa - The Saudis, the Americans and their allied partners who have committed crimes and atrocities against humanity in Yemen are still stubbornly refusing to admit their wrongs. 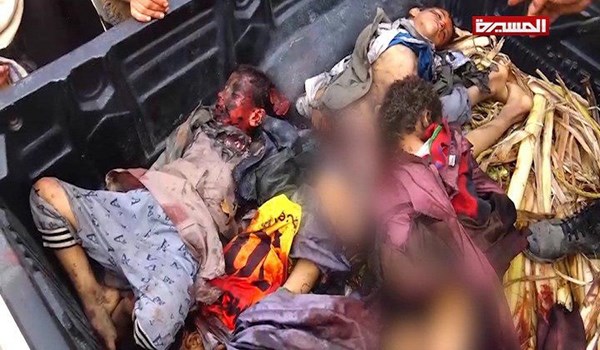 RNA - Not only do the Saudi leaders refuse to admit their war crimes and sincerely apologize to Yemeni victims; they have all made every effort to cover up their atrocities in the poorest country in the Arab world. After three years, the Saudi regime has never faced up squarely to its war-waging and misery-inflicting policy. It has never conducted conscientious introspection and earnest reflection; nor has it made an official apology. Instead, it has on numerous occasions honored its culprits and commanders of war of aggression, who have caused terrible suffering to millions of besieged people in Yemen.

Now what they are doing is blatantly alter history and facts on the ground, seeking to depict the US-backed Saudi-led war of aggression as the “liberation of Yemen”, and attempting to reinterpret bloody massacres as “a self-defensive holy war”.

It is time for the international civil society to call on Saudi Arabia to acknowledge the truth without bias or distortion, to indulge in profound introspection, to make sincere apologies to its neighbor in the Arabian Peninsula region, and to unequivocally and irreversibly renounce militarism, which up to this day has affected millions of people across the war-torn nation and beyond.

The Saudis should also take concrete action to show their sincerity by following a path of peaceful development, promoting peace and reconciliation, and safeguarding regional peace and stability, not just in Yemen but in Iraq and Syria as well. They can and they should do in penitence and atonement to wash away memories of the sins and crimes committed by their forces and allies, and to prevent the spread of humanitarian suffering and disaster.

In the aftermath of a horrific bombing earlier this month that killed dozens of children aboard a school bus in Yemen, the Saudis should further allow international investigators to enter the country and examine and account for the loss of civilian lives.

The results were horrific. Of the 54 people killed, 44 were children, with most between the ages of six and 11. The pictures of the dead and injured children, some of whom can be seen wearing their blue UNICEF backpacks, are beyond heartbreaking.

According to Fars News Agancy, it doesn’t take a strategic mind to realize that the Saudis are not fit to investigate their own wars crimes or “look into what happened here” as Washington, their partner in crime and arms supplier, would like to suggest. Simply put, they will just shield their military personnel and coalition partners from criminal liability.

Tragedy in Yemen is unrelenting. Just this past Thursday, a mere two weeks after the school bus attack, Saudi-led coalition airstrikes killed yet again another 26 children and four women fleeing the fighting in the western province of Hodeidah.

The reality is that the dirty war has created the world’s worst humanitarian catastrophe. Three-quarters of the population, some 22 million Yemenis, require humanitarian assistance and protection. About 8.4 million people hang on the brink of starvation and another 7 million lie malnourished. Since 2015, more than 28,000 thousand people have been killed or injured, and many thousands more have died from causes exacerbated by war, such as a cholera epidemic that has afflicted more than a million people. At least one child dies every 10 minutes from causes linked to the illegal war, according to the United Nations.

This is also a story about the responsibility of the United States. The bomb used in the school bus airstrike was a 500-pound laser-guided MK 82 bomb, manufactured by Lockheed Martin, one of the largest US defense contractors. Having facilitated the sale to the Saudi-led coalition of the weapon used to kill these children, Washington bears responsibility for their deaths as well. The US government is complicit in the Saudi war crimes and must be held to account.

The US government is also expected to acknowledge the reality without bias or distortion, to indulge in profound introspection, to make sincere apologies to Yemen, and to unequivocally and irreversibly renounce war, which up to this day has killed many people. The US government should also take concrete action to show its sincerity by ending its support for the Saudi-led militarism and that means halting its weapons supplies too.

Last but not the least, the US government and other parties to this dirty conflict should also apologize to the people of Yemen for not having given them an opportunity to build a peaceful, prosperous and harmonious post-Hadi Yemen.

Tags: US Yemen Saudi
Short Link rasanews.ir/201qGy
Share
0
Please type in your comments in English.
The comments that contain insults or libel to individuals, ethnicities, or contradictions with the laws of the country and religious teachings will not be disclosed