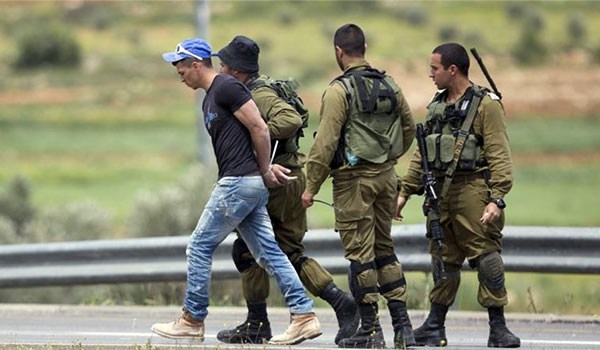 PPS added that three other Palestinians were detained from the Southern West Bank district of Bethlehem.

In Ramallah district, Israeli forces three Palestinians, including a former prisoner, after storming their families’ homes in Kobar village, Northwest of Ramallah.

Another Palestinian was reportedly detained from the central West Bank district of Ramallah and al-Bireh.

In Hebron district, forces detained a Palestinian and seized his vehicle after storming his family’s home in Hebron city.

This came several hours after Israeli police detained an anti-settlement activist after storming his home in the East Jerusalem neighborhood of Silwan.

The detainee was identified as Zuheir Khader Abdul-Fattah al-Rajabi, 47, who has played an instrumental role in confronting settler organizations’ plans to take over Palestinian property in Jerusalem.

Mohammad Thuqan, the owner’s son, told WAFA that almost 30 Israeli military vehicles destroyed the exterior doors of the shop when they broke in before they destroyed the interior and seized equipment/

The shop belongs to Ghassan Thawqan, a university lecturer, who had been detained along with his two of his sons last July.

Tags: Palestinian Israel
Short Link rasanews.ir/201qGt
Share
0
Please type in your comments in English.
The comments that contain insults or libel to individuals, ethnicities, or contradictions with the laws of the country and religious teachings will not be disclosed