Rasa - Pope Francis has kept mum for five years on an alleged sex abuse by a prominent US cardinal who was forced to resign last month, says a former top Vatican official, urging the pontiff to resign. 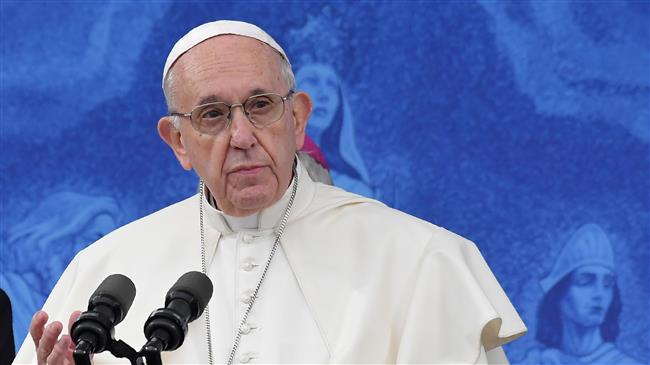 RNA - Archbishop Carlo Maria Vigano, a former secretary-general of the Vatican Governorate, says he himself told Pope Francis back in June 2013 that US Cardinal Theodore McCarrick had been accused of sexually abusing priests and seminaries of lower ranks.

“He knew from at least June 23, 2013, that McCarrick was a serial predator,” said Vigano, who served as the Vatican’s ambassador to the US at the time.

However, he added, the pontiff ignored the allegations and even lifted the bans imposed by his predecessor Pope Benedict on McCarrick.

The archbishop made the claim in an eleven-page letter to conservative Roman Catholic media outlets during the Pope’s visit to Ireland.

"Pope Francis has repeatedly asked for total transparency in the Church," wrote Vigano, adding, "In this extremely dramatic moment for the universal Church, he must acknowledge his mistakes and, in keeping with the proclaimed principle of zero tolerance, Pope Francis must be the first to set a good example for cardinals and bishops who covered up McCarrick’s abuses and resign along with all of them."

Cardinal McCarrick resigned in late July after it was proved he had sexually abused a 16-year-old boy.

Ireland's Prime Minister Leo Varadkar also used the first papal visit to his country in 39 years to demand action by the Roman Catholic Church to address the systemic cover-up of child abuse by priests and church institutions.

“Wounds are still open and there is much to be done to bring about justice and truth and healing for victims and survivors,” Varadkar told a state reception attended by the Pope, adding, “Holy Father, I ask that you use your office and influence to ensure this is done here in Ireland and across the world ... We must now ensure that from words flow actions.”

The claims raised against Pope Francis came after he promised on Saturday to put an end to the sexual abuse of children by the Catholic Church’s clergy.

Addressing an event in Ireland attended by some survivors of such sexual abuses, the pontiff said it was a shame for the Church that it had failed to address such “repugnant crimes.”

As he began his visit to Ireland, protesters held baby shoesduring their demonstrations in central Dublin to raise awareness about the scandals that have gripped the Catholic Church.

According to Press TV, Ireland has been a victim of child abuses by priests and church institutions over the past years. Several cases have been exposed between 2005 and 2014 in various parts of the country.

The first reports of children and bishops being sexually abused by Catholic priests were released by Boston Globe back in 2002. Since then, several other cases have been reported across Europe, the US, Australia, and Chile.

Tags: sexual abuse Pope Francis
Short Link rasanews.ir/201qGc
Share
0
Please type in your comments in English.
The comments that contain insults or libel to individuals, ethnicities, or contradictions with the laws of the country and religious teachings will not be disclosed