Rasa - Protesters have staged demonstrations in central Dublin to raise awareness about the scandals that have gripped the Catholic Church as Pope Francis began his trip to Ireland. 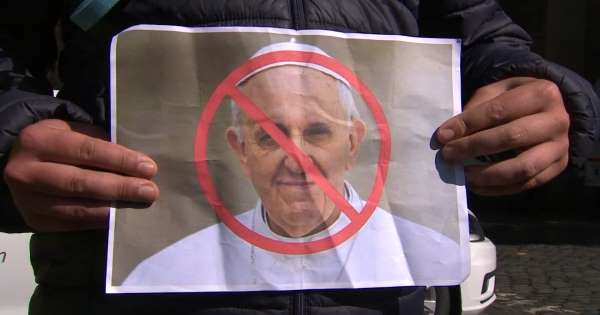 RNA - A series of official government inquiries between 2005 and 2014 exposed sexual abuse of minors by priests in various areas of Ireland. Irish Prime Minister Leo Varadkar, who greeted the Pope at Dublin Castle, used the first papal visit to Ireland in 39 years to underline that the wounds of clerical abuse were still open and action needed to follow.

"I cannot fail to acknowledge the grave scandal caused in Ireland by the abuse of young people by members of the Church charged with responsibility for their protection and education," Francis told a state reception attended by some abuse survivors.

"The failure of ecclesiastical authorities - bishops, religious superiors, priests and others - adequately to address these repugnant crimes has rightly given rise to outrage and remains a source of pain and shame for the Catholic community," he added.

Tags: Pope Francis Ireland protest
Short Link rasanews.ir/201qGX
Share
0
Please type in your comments in English.
The comments that contain insults or libel to individuals, ethnicities, or contradictions with the laws of the country and religious teachings will not be disclosed