Rasa - Iraqi Prime Minister Haider al-Abadi underlined his strong opposition to the withdrawal of Hashd al-Shaabi (popular forces) from large cities, noting that the danger of the ISIL terrorist group is still alive. 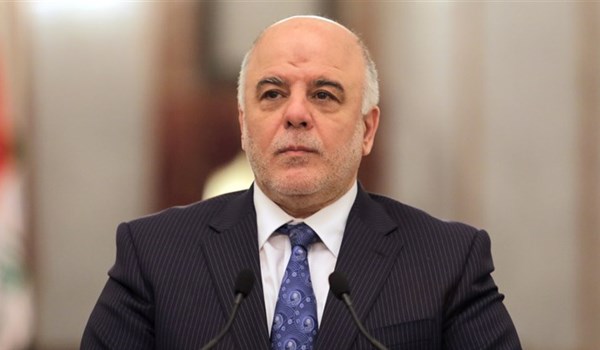 RNA - "Hashd al-Shaabi's withdrawal from large cities should not be affected by political pressures because the ISIL ideology still exists despite being defeated and expelled from Iraq and therefore, we should continue war against it," al-Abadi said on Friday.

He voiced opposition to the withdrawal of Hashd al-Shaabi forces from major cities and certain other regions in the current period of time, and said, "Evacuation of these regions will give the terrorist groups an opportunity to attack the Iraqi citizens."

According to Fars News Agancy, Al-Abadi said the government will stand against those who want to distort Hashd al-Shaabi's face.

In relevant remarks in March, al-Abadi defended his decree to formally incorporate Hashd al-Shaabi forces into the Arab country’s security service, stressing that such a move would help establish security and stability.

Abadi stated that the integration of the volunteer forces, better known by the Arabic name Hashd al-Shaabi, “preserves the identity of security forces”.

Tags: Hashd Haider al-Abadi Abadi
Short Link rasanews.ir/201qGP
Share
0
Please type in your comments in English.
The comments that contain insults or libel to individuals, ethnicities, or contradictions with the laws of the country and religious teachings will not be disclosed