Rasa - Pope Francis is set to meet victims of Catholic Church sex abuse during the Republic of Ireland's first papal visit in decades. 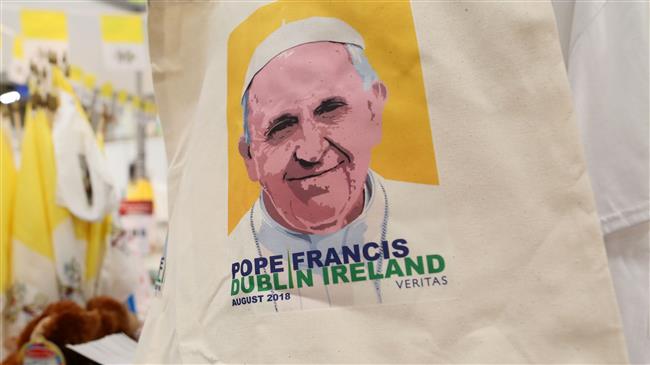 RNA - Pope’s Saturday visit to Ireland comes as the country is no longer very loyal to the Catholic Church after voting for controversial practices in referendums in defiance of ecclesiastical teachings.

The victims of numerous sexual abuse scandals by Catholic priests plan to demand strict measures by the pontiff to halt abuse under the protection of church leaders.

The visit coincides with the 2018 World Meeting of Families (WMOF) -- a global Catholic gathering that takes place every three years.

Pope Francis is also set to attend an outdoor mass in Dublin’s Phoenix Park on Sunday. The event is expected to draw 500,000 people. During last papal visit to Ireland in 1979 – by then Pope John Paul II – three-quarters of the county’s population reportedly attended his mass.

Irish Prime Minister Leo Varadkar said on Friday that he hoped Pope Francis’s visit would mark the beginning of a new chapter in Ireland's relationship with the Church.

The victims of clergy abuse and their supporters plan to hold a “Stand for Truth” protest rally in Dublin during the pope’s mass.

"We cannot stay silent as the Vatican uses its power and pomp to forcefully deny the reality of the harm it has done," organizers announced in their social media pages in which some 3,000 people had signed up to take part.

A silent vigil is further due to be held at the site of a former church-run home for unwed mothers in the town of Tuam in western Ireland -- where an unmarked grave with the remains of hundreds of babies was found in 2014 -- to show solidarity with victims of "mother and baby" homes -- institutions accused of being punishment hostels for unwed pregnant women.

"We have such a history of abuse and so many have had their lives destroyed," a survivor of church abuse, Marie Collins, told AFP.

"It is important that while he is here this issue is addressed face on and we get clear words as to what he's going to do and what is going to happen next," she said.

The Vatican said the pope will meet Irish victims of sexual abuse. He has also been urged to address the recent scandals that have led to the church's worst credibility crisis in more than 15 years.

The Vatican was rocked this month by a devastating US report into child sex abuse that accused more than 300 priests in the state of Pennsylvania of abusing more than 1,000 children since the 1950s, in addition to similar scandals in Chile and Australia.

The pope wrote a letter to the world's 1.3 billion Catholics vowing to prevent future "atrocities" but conceding no efforts "to repair the harm done will ever be sufficient."

Pope Francis, who was appointed in 2013 with a mandate to overhaul the Vatican, has promised strong action in response to sexual abuse cases and cover-ups.

Tags: Pope Francis Ireland
Short Link rasanews.ir/201qGO
Share
0
Please type in your comments in English.
The comments that contain insults or libel to individuals, ethnicities, or contradictions with the laws of the country and religious teachings will not be disclosed