Rasa - Iranian President Hassan Rouhani warned against economic war by enemies, specially the US, against the Islamic Republic, but vowed that his government will finally succeed to improve the country's economy. 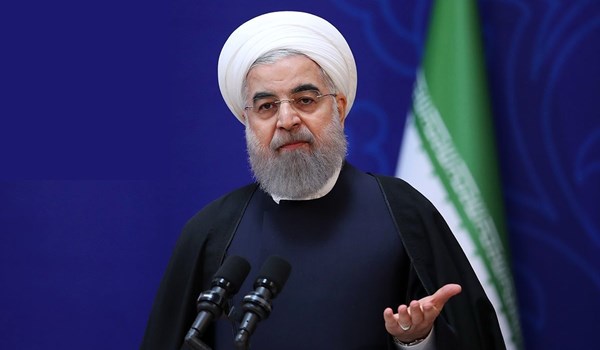 RNA - "My government is making every effort to alleviate the people's economic woes," President Rouhani said on Saturday.

The Iranian president underlined the need for unity to defeat the enemy.

"Today we are going through a difficult time in the face of enemies’ plots," he said while voicing confidence that the country would overcome the problems through unity.

In relevant remarks on Tuesday, President Rouhani reiterated his country's distrust in the US, and said Iran's defense capabilities guarantee peace in the region and the world.

"If we have increased our military power, it does not mean warmongering, but it means peace-seeking because we do not want war and therefore, our power should be deter enemies, otherwise that means giving a greenlight to invade the country," Rouhani said, addressing a ceremony to unveil a home-made supersonic combat fighter jet named Kosar in Tehran.

He said that Iran has made no aggression against any country in the past 40 years despite its exceptional opportunities.

"The reason that the US does not launch military attack against us is our power because it is aware of its costs and consequences," President Rouhani said.

Elsewhere, he underscored that definitely Iran has non trust in the US, adding that Washington's allies, including Europe, China and even Canada distrust the US.

Iran has made huge advances in developing different defense capabilities, including weapons and military equipment despite sanctions.

The country on Tuesday unveiled the first home-made supersonic fighter jet named Kosar which is equipped with avionics (aviation electronics) and fire-control systems.

According to Fars News Agancy, Kosar was unveiled in a ceremony participated by President Rouhani in Tehran today who ordered the fighter jet to fly.

The new fighter jet uses the fourth generation of military digital network and is equipped with heads-up display (HUD) system to increase the precision-striking power of weapons, advanced and multi-purpose radar for fire-control to boost the precision to trace the targets and threats and high-precision navigation system.

Kosar can be manufactured in two types of single-cockpits and double-cockpits and the second type can be used for training pilots in addition to enjoying combat capabilities.

Meantime, Chairman of the Iran Aviation Industry Organization Amir Karim Bani Tarafi  said that the fighter jet which was unveiled on Tuesday is a supersonic combat plane different from the training Kosar 88 plane unveiled in April 2017.

Tags: Iran Rouhani
Short Link rasanews.ir/201qGG
Share
0
Please type in your comments in English.
The comments that contain insults or libel to individuals, ethnicities, or contradictions with the laws of the country and religious teachings will not be disclosed