Rasa - The Saudi regime and its cronies, which gave us Al Qaeda and ISIL, continue to trump international law and any concerns about the lives of the besieged people in Yemen. 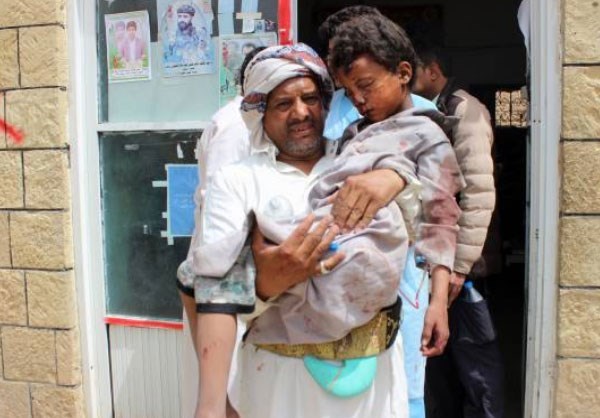 RNA - The terror-mongers are still determined to unravel a sovereign nation all because the people of Yemen have refused to cow back into submission and remain content with second-class status.

Quite the opposite, the people of Yemen have said yes to the resistance movement of Ansarullah, whose strength comes from the streets and from serving the people.

The resistance movement has unwavering loyalties among the people, military officers and senior politicians. It’s all the reason why the Saudi-led aggression, despite having US support, failed to capture the port city of Hodeidah.

According to the leader of Ansarullah movement, the Saudi regime and its allies in their push to capture the strategic port city of Hodeidah, also faced defeat on the country’s west coast.

Malik Badreddin al-Houthi made the remarks on Monday in a statement issued on the occasion of Eid al-Adha (Feast of Sacrifice) Muslim festivities.

The Ansarullah leader said Yemen’s West coast has turned into “a field of defeats for our enemies,” adding, “We ask God to take revenge on Al Saud for its crimes and treachery against Islam and Muslims.”

“Saudi Arabia and the United Arab Emirates are two regimes that excelled each other in hypocrisy and treachery in order to prove their complaisance to the United States and Israel,” the statement added.

The Ansarullah leader also condemned the Saudi regime for denying Yemeni nationals the right to go on Hajj pilgrimage in the kingdom.

Here's a look at some other key points and truths about the illegal war that continue to bother any conscience:

1. Under the fundamental rule of international law, Saudi Arabia and its regional cronies have no right to attack Yemen. They have no authorization from the UN Security Council and they are not acting in genuine self-defense. They offer no explanation for why their aggression would comport with international law. Without UN mandate, they have no right to act as unilateral cop or in alliance with others to strike Yemen.

2. It is wrong to assume that the airstrikes on Hodeidah, supported by the US government, are peripheral. They are central to the balance of power within the Arab world, to tensions within the region, and are at the core of fears in the global oil market.

3. The unjustified war has antagonized the people. The bombings have resulted in a large number of civilian casualties, spurring widespread anger in targeted Hodeida and other cities.

4. The campaign failed to put back Hadi in his presidential palace. That’s the nature of any illegal war. Calling it anything resembling a proxy war is silly, since the Saudis aren’t acting by proxy. They want to occupy and rule.

5. Backed by the US Army, Saudi-led warplanes are bombing the civilian infrastructure with little care for civilian life on the ground. They seek to salvage the US imperial policy by turning Yemen into a failed state; reinventing language to call this proxy war against Iran; and bombing the country into submission.

It’s all the reason why the UN Security Council should intervene and use the leverage it has to stop this madness. This kind of aggression and barbarity has gone against the UN Charter for a long time. Whatever happened to Chapter VII: Action with respect to threats to the peace, breaches of the peace and acts of aggression?

Tags: Yemen Saudi
Short Link rasanews.ir/201qG9
Share
0
Please type in your comments in English.
The comments that contain insults or libel to individuals, ethnicities, or contradictions with the laws of the country and religious teachings will not be disclosed