Rasa - Going against international law and what the international civil society wants, which is troop withdrawal, Col Sean Ryan, a spokesman for the US-led coalition in Iraq, says that US troops are intending to remain in Iraq “as long as we think they’re needed.” He says this is vital to the stabilization efforts in post-ISIL Iraq. 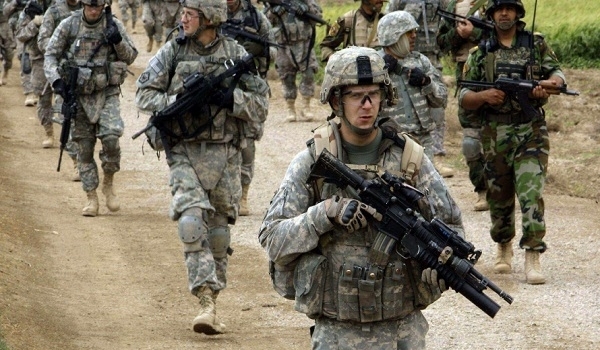 RNA - This is in keeping with other comments out of the Pentagon, where officials more or less uniformly envision a permanent US military occupation of Iraq, and have not been shy in saying so. And don’t believe it when President Trump says he’s keen to withdraw troops once ISIL is defeated.

Also, don’t believe it when Col. Ryan says it is possible there could be some minor drawdowns of US troops from Iraq in the future, and that even this would depend heavily on the rest of NATO committing substantial numbers of troops to Iraq for training operations.

The decision by the Pentagon to stay the course means there will be plenty more casualties this year, and not just because of the seemingly permanent US military presence there. The Empire of Chaos plans to create a string of bases as staging areas for a permanent occupation of the region on the pretext of fighting terror. And there is no end in sight to the US at war, declared and undeclared, both because the War Party has found the perfect enemy (terror), and because no one at the United Nations is willing to stand up to it.

This is while the botched Iraq war and the bogus “War on Terror” have only brought immense, atrocious, sustained loss of life and chaos to the people of Iraq and the rest of the region. From their standpoint, all foreign occupying troops must leave, despite the inherent security risks. After all, permanent occupation only advances the aims of those who profit from the circumstances - US military contractors and a global banking/financial elite.

No doubt democratic Iraq is in peace with itself and its neighbors. So it is past time for the world community to robustly push for an end to the US occupation since security and stability are crucial for the development of the war-torn country as well as for the advancement of regional peace and security.

In addition, the competing big powers must acknowledge the crucial need of cooperation in the “real” war on terrorism and extremism. Iraq and its neighbours are on the same page in promoting peace and encouraging all parties to take part in political and reconstruction efforts. The pressing question is whether the United States and its NATO partners are also on the same page?

According to Fars News Agancy, the world is witnessing that Washington’s cynical militarism is a plague upon the Middle East where the Military-Industrial Complex profits and innocent civilians die. As long as this insanity, this power-politics continues, the bogus “War on Terror” which justifies permanent occupation will never end.

Many years of occupation and terror have taught us that permanent occupation of Iraq will be counterproductive even to America’s own interests. The presence of combat forces will make things worse, adding fuel to the lure of jihadism with drastic consequences and straightforward blowbacks.

It is evident that for more than a decade now these forces have been desperately trying to maintain America’s supremacy in the chessboard of regional politics with little success and many lost lives. All this suggests that only when foreign occupying forces are all gone, will peace and security return to Iraq and the greater region.

Tags: US Iraq
Short Link rasanews.ir/201qG8
Share
0
Please type in your comments in English.
The comments that contain insults or libel to individuals, ethnicities, or contradictions with the laws of the country and religious teachings will not be disclosed