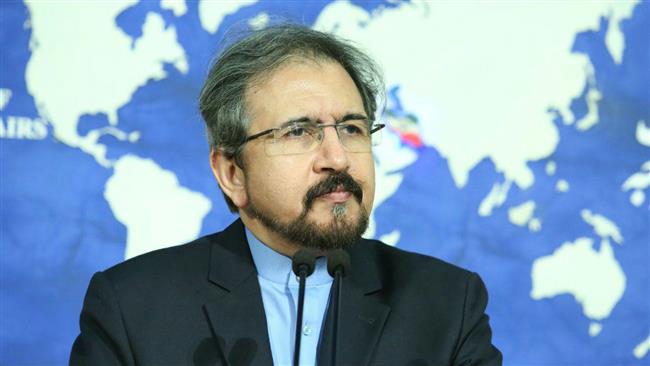 Yemen’s Arabic-language al-Masirah satellite television network, citing a spokesperson of the country’s Health Ministry, reported that all the victims, whose vehicle was also destroyed in the Thursday strike, were internally displaced people.

Al-Masirah, citing local sources, had reported earlier that at least 22 children and four women lost their lives in the deadly strike, adding that all those on board the vehicle were killed.

Qassemi said the world is witnessing another crime against the oppressed Yemeni people in a short time after a strike by the invading military coalition hit a school bus in Yemen and killed scores of children.

Back on August 9, Saudi-led warplanes hit a school bus in the town of Dhahyan in Yemen’s northern province of Sa’ada with a 227-kilogram laser-guided Mark 82 bomb, killing a total of 51 people, among them 40 children, and leaving nearly 80 others wounded.

The Iranian spokesperson said the civilians are killed due to the "silence and indifference of influential international bodies."

"Iran once again calls on international and human rights bodies to prevent in whatever possible ways the continuation of such crimes by Saudi-Emirati warplanes in Yemen given the sequence of these human crimes and painful tragedies as well as their destructive impacts on regional and international peace and security," Qassemi pointed out.

He added that the countries that are providing aggressors with lethal weapons and bombs are also responsible for the killing of Yemeni women and children, saying, "They should give response to the international community and the Yemeni people about their policies and the outcome of their measure."

The Iranian spokesman called on the UN and influential countries to increase their efforts in order to put an immediate end to the Saudi-led coalition's strikes against the Yemeni civilians and adopt necessary strategies and measures to protect their lives and health.

In a 90-page analysis on the investigative work of a body, known as the Joint Incidents Assessment Team (JIAT), Human Rights Watch said on Friday a so-called investigatory body, overseen by Saudi Arabia, has for more than two years been covering up war crimes committed by the kingdom in Yemen.

The Al Saud regime along with some of its allies, particularly the UAE, has been waging a deadly war against impoverished Yemen since March 2015 in an attempt to reinstall former president Abd Rabbuh Mansur Hadi and crush the popular Ansarullah movement.

Some 15,000 Yemenis have been killed and thousands more injured since the onset of the Saudi-led aggression on Yemen.

According to Press TV, Lebanon's Hezbollah resistance movement also on Thursday slammed the Saudi crimes in Yemen and ‘suspicious’ international silence in this regard.

In a statement released by its Media Relations Office, Hezbollah described as war crimes the attacks carried out by the Saudi-UAE alliance.

It said, “Even before the blood of school students dries up, the US-Saudi aggression has committed a new massacre in Yemen’s Hudaydah, killing dozens of children and women… amid suspicious silence by the international community which only counts the number of victims.”

“Attacks by US-Saudi alliance: killing children and women as well as destroying schools, hospitals, markets and heritage sites in Yemen are all war crimes in every sense of the word,” the statement added.

The Lebanese resistance group denounced the continuation of such crimes against the Yemeni people and called on the international community to “stand against this savage aggression in order not to be complicit in these crimes.”

Hezbollah also saluted the Yemeni leadership and people, stressing that the “blood of innocents will triumph over the swords of the headmen.”

Tags: Bahram Qassemi Iran Yemen Saudi
Short Link rasanews.ir/201qG6
Share
0
Please type in your comments in English.
The comments that contain insults or libel to individuals, ethnicities, or contradictions with the laws of the country and religious teachings will not be disclosed