Rasa - A series of violent clashes have erupted between protesters and security forces during Eid al-Adha, or the Feast of Sacrifice, celebrations in Indian-controlled Kashmir. 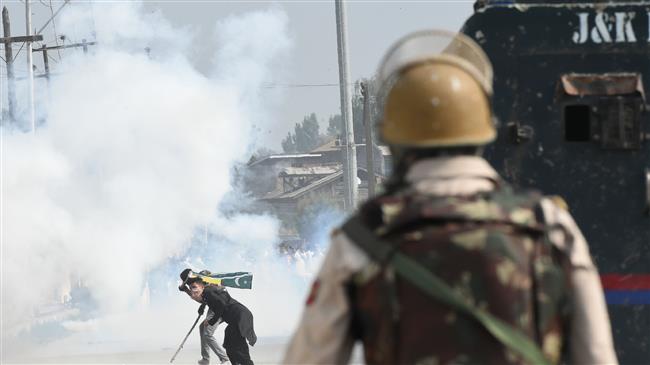 RNA - Indian forces fired tear gas and pellet guns to disperse stone-throwing protesters after Eid prayers in Kashmir’s summer capital of Srinagar on Wednesday. Several protesters were reportedly injured as they clashed with troops in downtown and elsewhere in the main city.

According to The Hindu newspaper, similar protests were held in the towns of Anantnag, Sopore and Kupwara across the Muslim-majority Himalayan valley. The police said a youth sustained a pellet injury in his right eye in Anantnag.

New Delhi has deployed some 500,000 soldiers to the disputed region to further boost security of the borderline and enforce a crackdown on pro-independence demonstrations in its share of Kashmir, where anti-India sentiments are high.

In a recent incident, an intense fighting left at least seven fighters and a member of Indian security forces dead in the suburbs of the southern town of Shopian.

According to Press TV, Kashmir has been divided between India and Pakistan since the end of the British colonial rule in 1947. Both sides claim the Himalayan region in full. However, many people in New Delhi-controlled Kashmir, who are mainly Muslims, are opposed to Indian control and seek either autonomy or a merger with Pakistan.

New Delhi accuses Islamabad of supporting pro-independence fighters, an allegation rejected by the Pakistani government, which, in turn, is critical of India's heavy military deployment to Kashmir, some 500,000 soldiers, and its crackdown against the region's Muslim population.

In June, the United Nations issued a report, calling for an investigation into purported abuses perpetrated by Indian security forces in Kashmir. New Delhi, however, rejected the report, lambasting it as "fallacious" and "tendentious.”

Tags: Kashmir India
Short Link rasanews.ir/201qFn
Share
0
Please type in your comments in English.
The comments that contain insults or libel to individuals, ethnicities, or contradictions with the laws of the country and religious teachings will not be disclosed