Rasa - Pope Francis has reacted to a recent US report on clerical child sex abuse in the US state of Pennsylvania, acknowledging “with shame and repentance” the Catholic Church’s failure to bring to justice perpetrators of the heinous act. 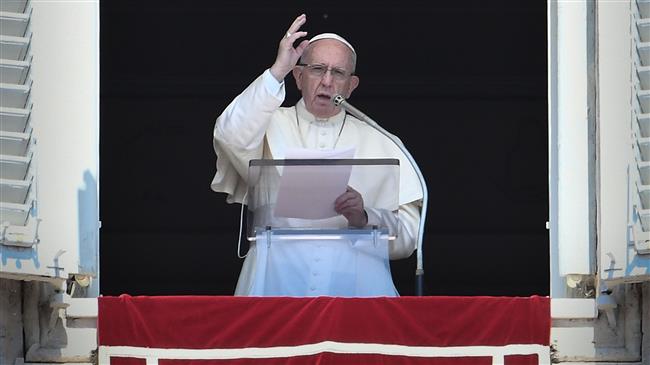 RNA - The pontiff made the remarks in an unusually blunt letter released by the Vatican on Monday, after a grand jury in Pennsylvania released last week the findings of an expansive investigation of sex abuse in the US Catholic Church, reporting that 301 “predator priests” in six of the state’s dioceses had sexually abused more than 1,000 minors in their care over the past 70 years.

"In recent days, a report was made public which detailed the experiences of at least a thousand survivors ... the abuse of power and of conscience at the hands of priests," Pope Francis said in the letter.

"Even though it can be said that most of these cases belong to the past, nonetheless as time goes on we have come to know the pain of many of the victims," he continued.

"With shame and repentance, we acknowledge as an ecclesial community that we were not where we should have been, that we did not act in a timely manner, realizing the magnitude and the gravity of the damage done to so many lives," the Pope said.

According to Press TV, he denounced as "atrocities" the allegations revealed by the US report, saying, "We have realized that these wounds never disappear and that they require us forcefully to condemn these atrocities and join forces in uprooting this culture of death.”

Reaffirming "solidarity" with the victims and a fight against "spiritual corruption," the 81-year-old Vatican leader said, "No effort to beg pardon and to seek to repair the harm done will ever be sufficient."

The Roman Catholic Church has been hit by numerous scandals in the past few years, involving allegations of covering up the sexual abuse of children by priests to protect pedophiles and the reputation of the Church.

Approximately 6,900 US Roman Catholic priests were accused of sexual abuse with at least 16,900 young victims between 1950 and 2011, according to data from the US Conference of Catholic Bishops.

Similar patterns of abuse have since emerged at dioceses around the globe, undermining the Church’s moral authority and depleting its finances as it paid out billions of dollars in settlements.

The American watchdog group bishopaccountability.org revealed in a new report that Catholic dioceses and religious orders in the United States have paid out nearly $3 billion in out-of-court settlements and court order awards to sex abuse victims since the mid-1980s.

Pope Francis, who was appointed in 2013 with a mandate to overhaul the Vatican, had warned that there will be “no privileges” for bishops when it comes to child sex offenses. The pontiff also promised more action in response to accusations of cover-up and excessive leniency by the Vatican.

Tags: sexual abuse Pope
Short Link rasanews.ir/201qFd
Share
0
Please type in your comments in English.
The comments that contain insults or libel to individuals, ethnicities, or contradictions with the laws of the country and religious teachings will not be disclosed