Rasa - Iranian Foreign Minister Mohammad Javad Zarif says the United States is suffering from the disease of addiction to imposing sanctions on Iran. 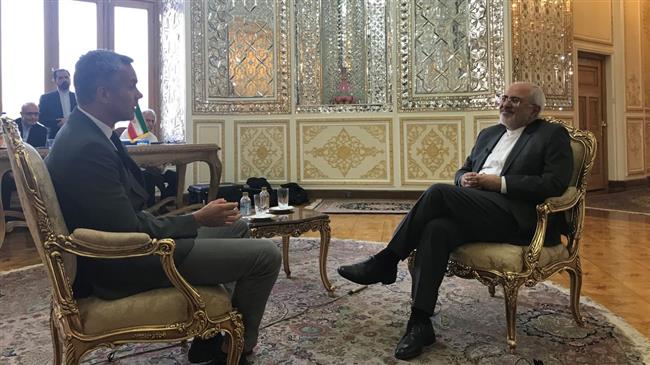 RNA - "I believe there is a disease in the United States and that is the addiction to sanctions," Zarif said in an interview with CNN from Tehran on Sunday.

The interview coincided with the 65th anniversary of a US-backed coup that toppled the democratically-elected government of Prime Minister Mohammad Mosaddegh. The putsch came after Mosaddegh nationalized Iran's oil industry which had become a monopoly of Britain.

Zarif believes that the 2015 nuclear deal between Iran and the P5+1 group of countries could be revived regardless of the Trump administration's denunciation of it.

President Donald Trump announced on May 8 that Washington was walking away from the nuclear agreement and that he planned to reinstate US nuclear sanctions on Iran and impose "the highest level" of economic bans on the Islamic Republic, jeopardizing the survival of the landmark accord.

Washington reinstated a series of unilateral sanctions against Iran in early August and would re-impose a second batch in November which would primarily be meant to undermine Tehran’s oil exports.

Zarif stressed that sanctions are ineffective, expressing his dismay that the US has not learned that yet.

"We felt that the United States had learned that at least as far as Iran is concerned, sanctions do produce economic hardship but do not produce the political outcomes that they intended them to produce, and I thought that the Americans had learned that lesson. Unfortunately I was wrong," Zarif said during the hourlong interview.

Earlier on Sunday, Zarif hit out at the US for setting up a team to coordinate its pressure campaign on Iran, saying it is yet another plot to topple the Iranian government.

He told CNN that the US has illusions and uses the same approach it used in the 1950s. "I think the US administration still believes that it is working with the government it installed in Iran after the 1953 coup," he said. "As they say, they have to wake up and smell the coffee."

During the interview, the Iranian top diplomat rejected the possibility of future negotiations with the Trump administration, and believed that the accord can be revived with pressure from European allies. However, he accused the US of "bullying" Iran’s European partners in the deal.

"We do not want to revisit that nuclear deal," he said. "We want the United States to implement that nuclear deal. Today the closest US allies are resisting those sanctions. The US basically arm-twisting -- its attempt to put pressure. I don't want to use the term bullying ... [but] that's what it amounts to."

No Rouhani-Trump meeting before US reinstates deal

According to Press TV, Zarif also ruled out a meeting between Iranian President Hassan Rouhani and Trump, saying the previous nuclear deal had to be respected first.

"Not when the previous huge progress that we made was thrown out," he said in response to a question as to whether Rouhani could benefit from a one-on-one meeting with Trump. "That [previous deal] was for us the litmus test of whether we can trust the United States or not."

Regarding the new wave of sanctions due to be reinstated in early November against the Iranian oil industry, Zarif noted that decades of pressure meant the Iranian people would be resistant to this pressure, yet it would have an impact.

The Iranian foreign minister said the recent economic problems, which have seen the local currency fall and fruit and vegetable prices sometimes double, were because of preparatory measures being taken.

"The economic upheaval that you see right now in Iran is because of the measures that needed to be taken to be prepared for those days, so we are prepared for the worst case scenario," he said.

Tags: US Iran Zarif CNN
Short Link rasanews.ir/201qFY
Share
0
Please type in your comments in English.
The comments that contain insults or libel to individuals, ethnicities, or contradictions with the laws of the country and religious teachings will not be disclosed