US condemned for supplying bombs to Saudis

Rasa - Americans have taken to social media to condemn the US government for supplying the Saudis with bombs used to kill innocent children in Yemen. 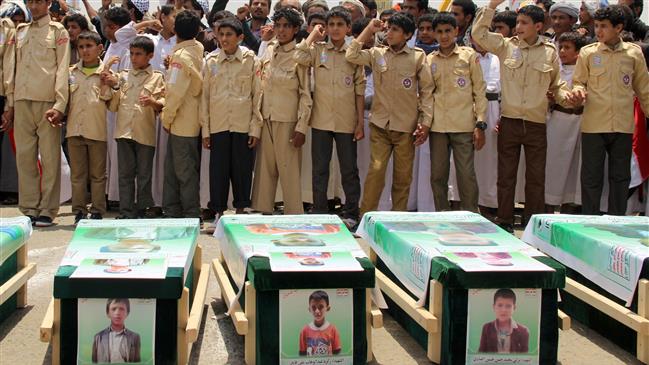 RNA - CNN on Friday confirmed that a bomb used by the Saudi-led coalition last week in an attack on a school bus in Yemen, which killed dozens of children, had been supplied by the US.

People from around the world concerned with the criminal activities going on in Yemen posted condemnations on social media on Saturday.

US actor Jim Carrey tweeted that Saudi Arabia is a US ally and that makes Washington an accomplice in the killing of 40 innocent children.

40 innocent children killed on a bus in Yemen.
Our ally.
Our missile.
Our crime. pic.twitter.com/yQ7FULulj2
— Jim Carrey (@JimCarrey) August 17, 2018

Weapons experts told CNN on Friday that the bomb was a 227-kilogram laser-guided Mark 82 bomb.

They also noted that the numbers on the weapon identified major US military contractor Lockheed Martin as its maker.

Political consultant Peter Daou asked why the US was supplying bombs to slaughter children in Yemen.

WHY ARE WE SUPPLYING BOMBS TO SLAUGHTER CHILDREN IN #YEMEN? https://t.co/MROikLZa9G
— Peter Daou (@peterdaou) August 17, 2018

Ed Krassenstein of the Washington, DC-based political newspaper and website The Hill wrote that former US President Barack “Obama banned the sale of these bombs to the Saudis but Trump lifted that ban as part of his attempt to undo everything Obama did.”

BREAKING: The bomb that killed 40 children on a bus in Yemen was supplied to the Saudis by the US, according to @CNN.
Obama banned the sale of these bombs to the Saudis but Trump lifted that ban as part of his attempt to undo everything Obama did.
Trump’s ego aided this attack
— Ed Krassenstein (@EdKrassen) August 18, 2018

The  Saudi  attack on a school bus in the town of Dhahyan on August 9 that killed a total of 51 people, among them 40 children, and left 79 others wounded, sparked outrage from international human rights groups and UN officials.

UN Secretary General António Guterres condemned the attack and called for an “independent and prompt” probe into the air strike.

Guterres emphasized that “civilians and civilian objects” be spared from attacks.

Hard to look at but important to see - survivors of airstrike by the Saudi-led coalition on school bus in #Yemen. The UK has sold about 5 billion pounds worth of arms to Saudi Arabia since the conflict began. So far no response from the UK gov - apart from a single tweet pic.twitter.com/cyrZVpeKAp
— Orla Guerin (@OrlaGuerin) August 18, 2018

The bus targeted by the Saudi forces was carrying a group of young school children attending summer class.

Tags: US Yemen Saudi
Short Link rasanews.ir/201qFE
Share
0
Please type in your comments in English.
The comments that contain insults or libel to individuals, ethnicities, or contradictions with the laws of the country and religious teachings will not be disclosed