Rasa - UN Secretary General Antonio Guterres has put forward options meant to protect Palestinian civilians, among them the deployment of an armed military or police force to the occupied territories. 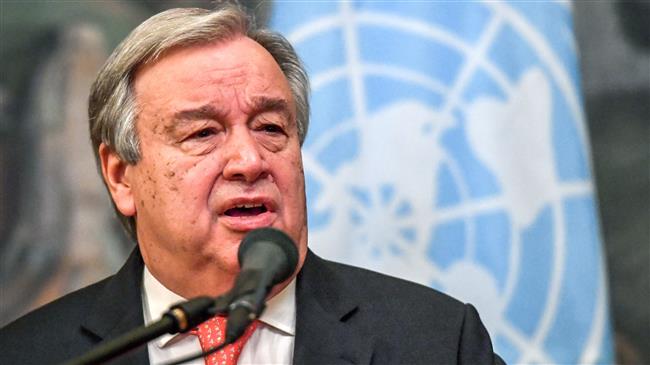 RNA - Guterres outlined four proposals in a 14-page report released on Friday in response to a request in a UN General Assembly resolution.

The resolution, adopted on June 13, condemned "Israel’s excessive and disproportionate use of force" against protesters in the blockaded Gaza Strip and asked the UN chief to recommend an “international protection mechanism” for Palestinian civilians.

According to Press TV, Guterres' proposed options include creating a civilian observer mission in the occupied lands, sending more UN humanitarian aid to the region and providing a “more robust UN presence on the ground” with rights monitors and political officers to report on the situation.

The fourth proposal is deploying an armed military or police force under a UN mandate to provide physical protection to Palestinian civilians.

He further stressed that the UN was already undertaking many protection initiatives but that “these measures fall short” of the concerns raised in the UN General Assembly resolution.

The resolution garnered a strong majority of 120 votes in the 193-member assembly, with 8 votes against and 45 abstentions. It was put forward by Algeria, Turkey and Palestine after the United States vetoed a similar resolution in the UN Security Council earlier.

Elsewhere in his report, the UN chief underlined the need for a political solution to the Israeli-Palestinian conflict, adding however that “until such a solution is achieved, member-states may further explore all practical and feasible measures that will significantly improve the protection of the Palestinian civilian population.”

On Friday, Israeli forces killed three Palestinians, two in Gaza and another one in Jerusalem al-Quds.

Tensions have been running high near the Gaza fence since March 30, which marked the start of a series of protests demanding the right to return for the Palestinians driven out of their homeland.

The Gaza clashes reached their peak on May 14, marking the 70th anniversary of the Nakba Day (the Day of Catastrophe), which this year coincided with the US embassy relocation from Tel Aviv to occupied Jerusalem al-Quds.

At Least 167 Palestinians have been killed and over 18,000 others wounded in the fresh wave of violence, according to the latest figures released by the Palestinian Health Ministry.

Tags: Antonio Guterres UN Israel Gaza
Short Link rasanews.ir/201qFA
Share
0
Please type in your comments in English.
The comments that contain insults or libel to individuals, ethnicities, or contradictions with the laws of the country and religious teachings will not be disclosed