Pope Francis expresses his support for victims of US 'predator' priests

Rasa - Head of the Roman Catholic Church, Pope Francis, has voiced his support for the victims of "predator" priests in the United States amid mounting accusations of cover-up and leniency. 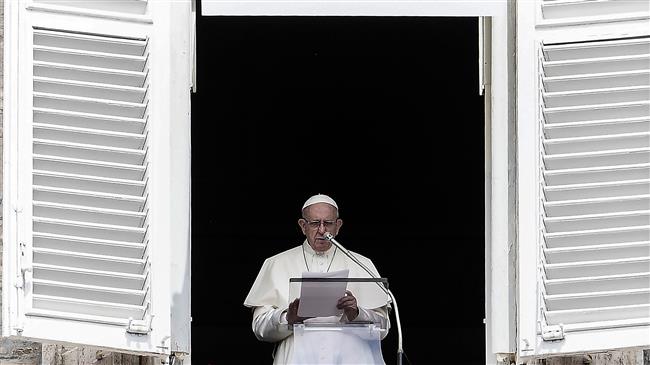 RNA - "Victims should know that the pope is on their side," the Vatican said in a statement on Thursday after a devastating report by a US court.

The report released by the Pennsylvania Supreme Court on Tuesday revealed that in seven decades more than 300 “predator priests” sexually abused over 1,000 children and the Catholic Church had launched a systematic cover-up of the abuses.

The Vatican statement said those who have suffered are the pope’s priority, and the Church wants to listen to them to root out this tragic horror that destroys the lives of the innocent". "There are two words that can express the feelings faced with these horrible crimes: shame and sorrow," the statement added.

It also said the church needed to learn "hard lessons from its past, and there should be accountability for both abusers and those who permitted abuse to occur.”

The report by the grand jury is reportedly the most comprehensive to date into abuse in the US church since the Boston Globe first exposed pedophile priests in Massachusetts in 2002.

A two-year investigation by the grand jury into all but two Pennsylvania dioceses turned up dozens of witnesses and half a million pages of church records containing "credible allegations against over three hundred predator priests."

The grand jury identified an estimated 1,000 victims; however, it said that the "real number" of victims was much higher.

Meanwhile, US authorities said the report had led to charges against two priests, one of whom had pleaded guilty.

The authorities added the majority of crimes happened too long ago to prosecute and those responsible for the abuses had mostly died.

"Priests were raping little boys and girls, and the men of God who were responsible for them not only did nothing; they hid it all. For decades," according to the grand jury report.

The grand jury said in its report that the priests’ victims were often traumatized for life, driven to drugs, alcohol and suicide.

According to Press TV, Church elders were promoted and predator priests allowed to remain in ministries for 10, 20, even 40 years after leaders learned of their crimes as the list of victims got longer and longer, Pennsylvania's Attorney General Josh Shapiro said.

"Despite some institutional reform, individual leaders of the church have largely escaped public accountability," the report added.

As the only recourse, the jury recommended changes to the law and expose what had happened to make sure such widespread abuse was never repeated.

The grand jury called for changes in the law that would scrap the statute of limitations for child sex abuse, give victims more time to file civil lawsuits and tighten legislation compelling people to report abuse they find out about.

Between 5,700 and 10,000 Catholic priests have been accused of sexual abuse in the United States, but only a few hundred have been tried, convicted, and sentenced for their crimes, according to the watchdog Bishop Accountability.

Since the abuse crisis became public in the 2000s, the US church has spent more than $3 billion in settlements, according to Bishop Accountability.

One estimate suggests up there were 100,000 US victims.

There are widespread accusations that the Catholic Church not only ignored, but even covered up cases of child abuse.

Pedophilia in Catholic churches has done enormous damage to its image, not only in the US, but also in many other countries from Australia to Chile.

Pope Francis, who was appointed in 2013 with a mandate to overhaul the Vatican, said that there would be a "zero tolerance" approach to clerical sex abuse. He promised to take strong action in response to accusations of cover-up and leniency by the Vatican.

However, Francis has been accused of being too soft on pedophiles. His credibility on the issue has been hit by a series of missteps and victims' organizations maintain that the Church remains reluctant to hand pedophile priests over to criminal justice authorities.

Tags: US Pope
Short Link rasanews.ir/201qF2
Share
0
Please type in your comments in English.
The comments that contain insults or libel to individuals, ethnicities, or contradictions with the laws of the country and religious teachings will not be disclosed