US lying about efforts to improve Gaza situation: Abbas

Rasa - Palestinian President Mahmoud Abbas has lashed out at the US for its dishonesty regarding the humanitarian situation in Gaza, saying American statesmen are lying when they talk of plans to address the crisis in the Israeli-blockaded territory. 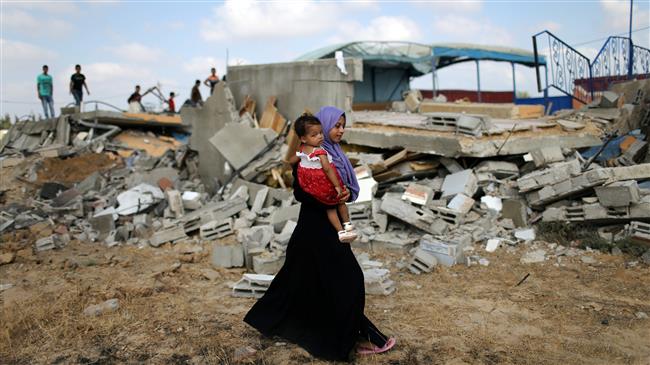 RNA - In a televised speech at the start of a Palestinian Central Council meeting in Ramallah on Wednesday, Abbas denounced as mere lies the recent claims by officials in US President Donald Trump’ administration that they want to improve the living conditions of Gazans.

The suffering of the Palestinian people in Gaza “started ever since there was an occupation and Israeli blockade,” he said. “The US has now woken up to defend and support our people. They are liars,” he added.

He said the American officials’ plan to promote “humanitarian aid and relief projects" in Gaza is in line with their own interests.

Back in June, the Israeli Haaretz newspaper reported that the Trump administration is trying to persuade the Persian Gulf Arab monarchies to invest in Gaza economic projects in a bid to calm the situation before Washington unveils its so-called Middle East peace plan.

The Palestinian Authority said back then that the so-called aid plan is a scheme meant to sow discord among Palestinians and get concessions on occupied Jerusalem al-Quds.

The Gaza Strip has been under an inhumane Israeli siege since 2007 and witnessed three wars since 2008. The Tel Aviv regime carries out regular attacks on Gaza under the pretext of hitting positions belonging to the Hamas resistance movement.

According to Press TV, the coastal sliver has also witnessed a fresh wave of tensions since March 30, which marked the start of a series of protests demanding the right to return for the Palestinians driven out of their homeland.

A total of 167 Palestinians have been killed and some 18,000 others wounded in renewed Gaza clashes, according to the latest figures released by the Palestinian Health Ministry.

Elsewhere in his speech, Abbas censured Israel’s adoption of a law that defines the occupied territories as an exclusively “Jewish state,” saying the Palestinians would stand together against the legislation.

“What Israel is doing now…in this clear and scandalous manner is absolutely intolerable,” he said. “Therefore, we are united against this racist and fascist law.”

The Knesset adopted the law last week by 62 votes to 55. It prioritizes Jewish values over democratic ones in the occupied territories, declares Jerusalem al-Quds the “capital” of Israel, allows Jewish-only communities, sets Hebrew as the official language of Israel and relegates Arabic from an official language to one with “special status.”

Additionally, Abbas touched on Trump’ much-touted “deal of the century” meant to resolve the Israeli-Palestinian conflict, saying the Palestinians would continue to fight against the initiative.

The Palestinian president further supported the resistance of Khan al-Ahmar residents against their forced eviction from Palestinian Bedouin village, east of Jerusalem al-Quds, urging them to “stop the Zionists from fulfilling their wishes.”

“We must stand with the residents of Khan al-Ahmar day and night, and not only with words, but also with popular resistance,” Abbas said.

Tags: US Palestinian Gaza
Short Link rasanews.ir/201qEs
Share
0
Please type in your comments in English.
The comments that contain insults or libel to individuals, ethnicities, or contradictions with the laws of the country and religious teachings will not be disclosed