Rasa - A delegation of UN commanders has visited Damascus for talks with Syrian Defense Minister Ali Abdullah Ayyoub on the redeployment of the world body’s peacekeepers to the volatile demilitarized zone along the Israeli-occupied side of Syria’s Golan Heights. 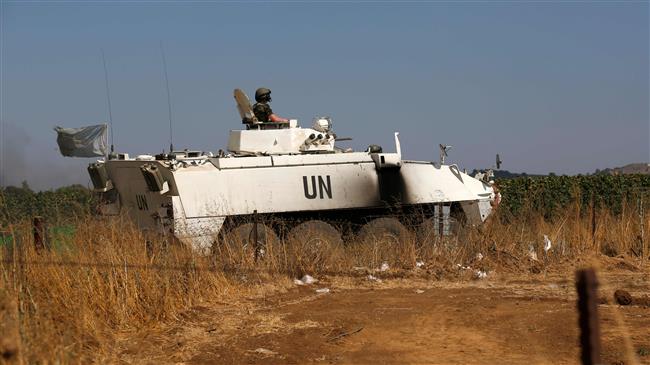 RNA - In a meeting in Damascus on Tuesday, the two sides discussed coordination between the Syrian government and the world body’s command on the resumption of the UN Disengagement Observer Force (UNDOF)’s mission along the ceasefire line between Syria and Israel based on the 1974 armistice, Syria’s official SANA news agency reported.

They also discussed an agreement for reopening the Quneitra crossing, which would allow Syrian families in Israeli-occupied Golan to return to their homeland under the auspices of the International Committee of the Red Cross (ICRC).

In 1967, Israel waged a full-scale war against Arab territories, during which it occupied a large swathe of Syria’s Golan Heights and annexed it four years later, a move never recognized by the international community.

In 1973, another war, known as the Arab-Israeli War, broke out between the Israeli regime and a coalition of Arab states, including Syria. A year later, a United Nations-brokered ceasefire came into force, according to which the Tel Aviv regime and the Syrian government agreed to separate their troops and create a buffer zone patrolled by the UNDOF.

Israel has built dozens of illegal settlements in the occupied Golan Heights since its occupation, and has used the territory to carry out a number of military operations against the Syrian government in support of the terrorists wreaking havoc on the Arab country.

The UNDOF mission pulled out of Golan in 2014, when al-Qaeda-linked terrorists overran the area and kidnapped dozens of Fijian peacekeepers.

Back then, the terrorists also seized UN weapons, equipment and uniforms in a foreign-backed campaign that saw Syria’s side of Golan Heights fall into their hands.

Over the past weeks, however, the Syrian army, backed by its allies, namely Iran, Russia and Lebanon’s Hezbollah resistance movement, has made sizeable gains against Takfiri terrorists in the country’s southern areas near the Israeli-occupied Golan Heights.

The liberation of those areas would cut Israel’s much-reported contacts with anti-Damascus militants and deal a blow to Tel Aviv’s plans to make the international community recognize its annexation of Syria’s Golan Heights.

Tel Aviv has thus increased its military presence in Golan as well as its aerial assaults against Syrian army positions in a bid to prop up terrorists.

Last week, Israel’s minister for military affairs, Avigdor Lieberman, admitted that Syrian ground forces are recovering from the losses they suffered during over seven years of battles against foreign-backed terrorists.

Separately on Tuesday, the Russian military said that it would help the peacekeepers fully restore their patrols in Golan and would leave the region once the UN mission fully takes charge.

“The Russian military police work in close interaction with the UN,” Lieutenant General Sergei Kuralenko told reporters during a visit to Golan. “We are offering all possible assistance to the UN mission to allow it to resume its operations in the demilitarized zone in full.”

The Russian military police has already set up a hotline with UNDOF and four checkpoints on the edge of the demilitarized zone, he said, adding that another four checkpoints are planned to be erected.

According to Press TV, Kuralenko also noted that a top priority for the Russian military police is to clear mines left by Takfiri elements.

“The main problem is a large number of explosive objects left,” he said. “We see our mission not only in clearing mines, but also in training local personnel. We are helping train Syrian military engineers so that they can do the job themselves.”

He further noted that most UN facilities in Golan had been heavily damaged during the war.

Tags: UN Syria Israel Golan
Short Link rasanews.ir/201qEa
Share
0
Please type in your comments in English.
The comments that contain insults or libel to individuals, ethnicities, or contradictions with the laws of the country and religious teachings will not be disclosed