Rasa - The UN has said that there is no justification for Saudi Arabia's latest massacre in Yemen which claimed the lives of scores of civilians, mostly of whom were children. 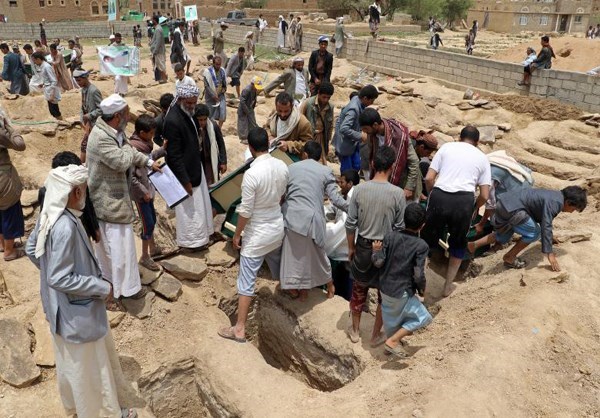 RNA - "What we are seeing today are the victims of the airstrike. The terrible human cost of the airstrike and of the war. The entire world condemns this," said UN humanitarian coordinator in Yemen Lise Grande on Tuesday during a trip to the war-torn country.

On Thursday, dozens of civilians have lost their lives and dozens more sustained injuries as Saudi warplanes targeted a bus carrying children in Yemen’s northwestern province of Sa’ada.

Grande added that the UN Secretary General has called for an "immediate transparent, comprehensive, independent investigation," into the deadly attack on civilians.

Meanwhile, UNICEF's resident representative in Yemen, Meritxell Relano, has called for an end to Saudi Arabia's war on Yemen and continued massacring of children.

"In the recent attack in Sa’ada, I have visited at least 13 children that have injuries and I hope that they are good to go very soon and back to play, and play football, and back to their normal lives because this has been a very shocking attacks, terrifying, which will leave them not only physical injuries but also psychological injuries," Relano added.

Meanwhile, the International Committee of the Red Cross (ICRC) has announced  40 children were among 51 civilians recently killed during a Saudi airstrike on the school bus in northwestern Yemen.

The children were returning from a trip organized by a religious seminary when the bus came under attack. Images later circulated online, showing pieces of a US-made bomb on the scene.

Thousands of mourners attended a funeral procession for many of the dead children in Sa’ada’s provincial capital of the same name on Monday, venting their anger against Riyadh and Washington.

According to Press TV, the Saudi-led coalition, however, described the attack as “legitimate,” with coalition spokesman Turki al-Malki even claiming that the strikes “conformed to international and humanitarian laws.”

Tags: Yemen UN Saudi
Short Link rasanews.ir/201qEX
Share
0
Please type in your comments in English.
The comments that contain insults or libel to individuals, ethnicities, or contradictions with the laws of the country and religious teachings will not be disclosed