Jordanian King Questions Feasibility of US Deal of Century

Rasa - Jordanian King Abdullah II rejected any possibility for the success of the US 'Deal of Century' peace plan without the partnership of Palestinians. 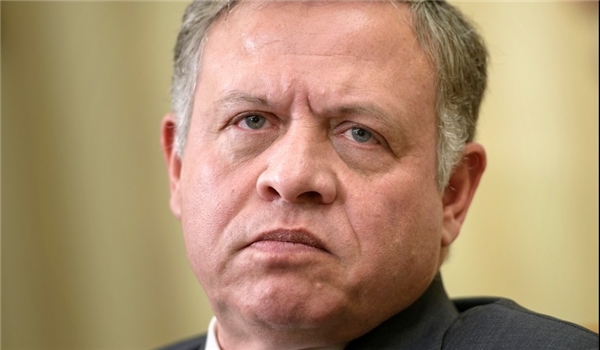 RNA - Abdullah II said during his secret talks with the US administration that any plan on the Palestinian issue needs agreement by the legitimate Palestinian bodies, the Arabic-language al-Ray al-Youm daily reported on Tuesday.

The newspaper quoted informed sources as saying that Jordan has stressed that Saudi Arabia, Egypt and Jordan cannot help the US peace plan, called 'Deal of Century', unless the Palestinian bodies agree with it.

According to Fars News Agancy, Jordan has also said that convincing the Palestinians to accept what is said in the media about the US plan is impossible.

In relevant remarks in July, a senior Hamas official described US President Donald Trump's proposed 'Deal of the Century' plan for Palestine as a Zionist plot, promising that the resistance movement would thwart it.

"The main core of this plan is the Sykes-Pico (an agreement of 1916 which led to partition of Turkish-held Syria, Iraq, Lebanon and Palestine into various French and British mandates). The Palestinian nation and Gaza resistance will foil it and the Deal of the Century will not succeed under any conditions," Osama Hamdan was quoted as saying by Quds Press news website.

He asked all the Islamic Ummah to adopt rapid measures to defuse the attempts to take control of the holy Quds city from the Muslims.

"The Deal of the Century is a Zionist plot to hit a blow to the Islamic Ummah, and Hamas will defuse this plot," Hamdan said.

Tags: US Palestinian King Abdullah Jordan
Short Link rasanews.ir/201qES
Share
0
Please type in your comments in English.
The comments that contain insults or libel to individuals, ethnicities, or contradictions with the laws of the country and religious teachings will not be disclosed