Rasa - Five members of a Yemeni family have been killed in a Saudi Arabian airstrike in the war-torn country's Hudaydah province. 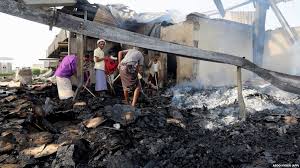 RNA - According to Yemen's Arabic-language al-Masirah television network on Monday, a couple and their three children were killed when Saudi warplanes targeted the province's al-Ashraf district.

The incident took place just several days after Saudi warplanes attacked a school bus at a market in the town of Dahyan in Sa’ada, leaving at least 51 civilians dead, including 40 children, and nearly 80 others injured.

Earlier on Monday, Huge crowds gathered in Sa’ada to bury dozens of children recently slain during the Saudi airstrike on a school bus.

According to Press TV, UNICEF, the United Nations children fund, called the carnage the single biggest attack on children in the ongoing Saudi war on Yemen.

Tags: Yemen Saudi
Short Link rasanews.ir/201qEJ
Share
0
Please type in your comments in English.
The comments that contain insults or libel to individuals, ethnicities, or contradictions with the laws of the country and religious teachings will not be disclosed