Iraq will not abide by US sanctions against Iran: Abadi

Rasa - Iraqi Prime Minister Haider al-Abadi says his government will only refrain from using the dollar in transactions with Iran without complying with the full scope of US sanctions against the Islamic Republic. 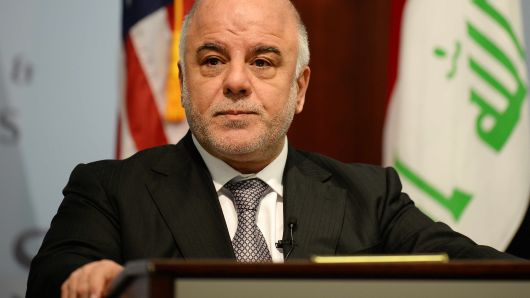 RNA - "Our commitment in the Iran issue is to not use the dollar currency in transaction, not abiding by the US sanctions," state television quoted the premier as telling a news conference in Baghdad on Monday.

US President Donald Trump announced on May 8 that Washington was walking away from the nuclear agreement, officially known as the Joint Comprehensive Plan of Action (JCPOA), which was reached between Iran and the five permanent members of the UN Security Council - the US, Britain, France, Russia and China - plus Germany in 2015.

Trump also said he would reinstate US nuclear-related sanctions on Iran and impose "the highest level" of economic bans on the Islamic Republic.

In defiance of warnings from the European Union, the JCPOA signatories and many international players, President Trump signed an executive order on August 6 re-imposing a first round of sanctions on Iran, which were lifted under the nuclear deal, to levy "maximum economic pressure" on the Islamic Republic.

The sanctions will cover Iran’s purchases of dollars, its trade in gold and precious metals, and its automotive sector. Further sanctions on oil and transactions with the central bank of Iran will come into effect on November 4.

Most of the Shia authorities in Iraq have criticized the new waves of US sanctions against Iran.

Slamming US sanctions against Iran as illegal, Iraqi clerics, Ammar al-Hakim, said Iraq should stand by Iran and help it.

Iraqi President Fuad Masum was also quoted by Rudaw news network as telling Alhurra TV that given Iraq and Iran's growing trade ties and other relations, it was hard for Iraqi companies to adhere to Washington’s sanctions on Tehran because it could backfire on Iraq.

"The situation in Iraq, the nature of its relations with Iran and large mutual interests will make it difficult for Iraq to comply with these decisions," Masum added.

According to Press TV, Abadi's remarks came in contradiction to those he made last week when he said Iraq did not agree with the US sanctions on Iran, but it would abide by them to safeguard its own interests, triggering widespread criticisms.

"As a matter of principle, we are against sanctions in the region. Blockade and sanctions destroy societies and do not weaken regimes," he said at a news conference on Tuesday.

The Iraqi prime minister's statement also came on the same day that Russia's Foreign Ministry said in a statement that Moscow was "deeply disappointed" by Washington's move to re-impose unilateral sanctions on Tehran, vowing to make its utmost efforts to save the landmark nuclear agreement.

"We are deeply disappointed by US steps to re-impose its national sanctions against Iran," the Russian ministry said on Tuesday.

Tags: US Iran Iraq
Short Link rasanews.ir/201qE6
Share
0
Please type in your comments in English.
The comments that contain insults or libel to individuals, ethnicities, or contradictions with the laws of the country and religious teachings will not be disclosed