US, UK must stop backing Saudi war on Yemen

The United States and Britain should take real action and stop supporting the Saudi-led massacre of civilians in Yemen, says an analyst. 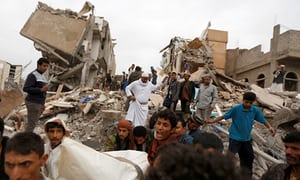 RNA - An investigation into a Saudi air raid against a school bus in Sa’ada province, which left at least 51 civilians dead, is “not sufficient” and Western powers are expected to stop giving arms and surveillance support to the Saudi war on Yemen, Saeed Shahabi, a political analyst and Middle East expert, saidon Monday.

“There needs to be an action. The action should be that the United States and Britain must withdraw their support and their contribution to the war on Yemen and the United Nations must stop giving its excuses for the Saudis that they are there to defend what they call the internationally recognized government,” Shahabi said.

Tags: US Yemen UK Saudi
Short Link rasanews.ir/201qE2
Share
0
Please type in your comments in English.
The comments that contain insults or libel to individuals, ethnicities, or contradictions with the laws of the country and religious teachings will not be disclosed