Rasa - The Damascus Army continued its rapid advances in the depth of Badiyeh (desert) of Sweida on Sunday and came close to the end of its military operation against the ISIL in the Southern province. 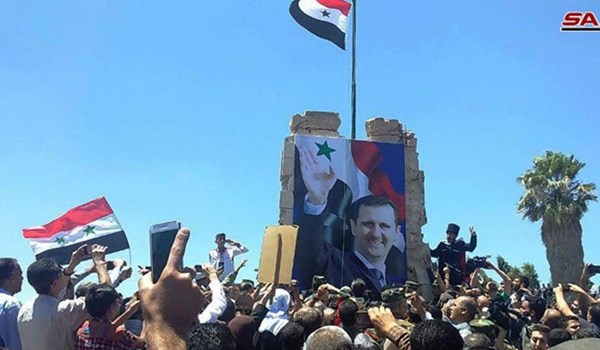 RNA - The government troops managed to advance in several flanks in the Eastern Badiyeh, and laid siege on the ISIL in a small limited area of land where a tough battle was underway between terrorists and government forces.

A military source also said that the army men, advancing in Badiyeh, will soon shake hand with their comrades that are operating in Qasr Shenvan region, adding that Eastern Badiyeh will be freed after the two groups of government forces reach each other.

The Syrian Army troops continued their rapid advances in the depth of Badiyeh of Sweida on Sunday and came close to the end of their anti-ISIL operation in the Southern province.

The army units managed to advance against ISIL in several flanks in the Eastern Badiyeh of Sweida, laying siege on ISIL in a small limited area of land where a tough battle is underway between terrorists and government forces.

In the meantime, a military source said that the army men, advancing in Badiyeh, will soon shake hand with their comrades that are operating in Qasr Shenvan region, adding that Eastern Badiyeh will be freed after the two groups of government forces reach each other.

The source further said that the army units have destroyed a number of ISIL's bases in their operation in Badiyeh.

The Syrian Army's artillery and missile units opened heavy fire at the positions and movements of Tahrir al-Sham Hay'at (the Levant Liberation Board or the Al-Nusra Front) in Northwestern Hama on Sunday, inflicting major losses on the terrorists.

The artillery and missile units pounded the positions of al-Turkistani Islamic Party, affiliated to Tahrir al-Sham, near the towns of Zeizoun and Qalaidin and in al-Ghaab Plain in Northwestern Hama, destroying several key positions and inflicting heavy casualties on the militants.

The army then expanded the scope of its attacks and also opened fire at militants' strongholds in Western Jisr al-Shughour in Western Idlib.

In the meantime, local sources reported that Abdul Rahim al-Abdu, a commander of the terrorists, and a number of his militants were killed after a guided missile of the army targeted terrorists' military vehicle along a road connecting Jisr al-Shughour and al-Sarminiyeh regions in Western Idlib.

Over 40 fighters of Tahrir al-Sham Hay'at as well as a number of civilians were killed in a huge blast at the terrorist group's arms depot in Idlib province on Sunday.

A huge explosion at a large depot of arms and ammunition of Tahrir a-Sham in the town of Sarmada near Bab al-Hawa border-crossing with Turkey destroyed fully two large six-story buildings in the region, killing 40 terrorists and an unspecified number of civilians. Dozens more have also been wounded in the explosion.

Local sources said that the death toll will rise as a number of people are still under the debris.

There is yet no further report on the cause of the incident.

In the meantime, a bomb went of in a vehicle of Tahrir al-Sham in the town of Sarmin in Southeastern Idlib, killing a number of terrorists.

Tags: Sweida ISIL
Short Link rasanews.ir/201qDt
Share
0
Please type in your comments in English.
The comments that contain insults or libel to individuals, ethnicities, or contradictions with the laws of the country and religious teachings will not be disclosed