Rasa - Huge crowds have gathered in Sa’ada to bury dozens of children recently slain during a Saudi airstrike on a school bus in northwestern Yemen. 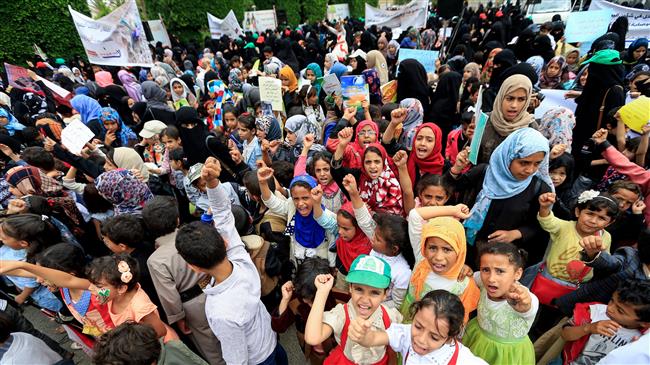 RNA - A funeral procession was held in Sa’ada’s provincial capital of the same name on Monday, with mourners having come from various places across the country.

Footage showed a long convoy of vehicles that carried the bodies of the victims as participants carried pictures of the attack and chanted slogans against Saudi Arabia.

On Thursday, Saudi warplanes attacked the vehicle at a market in the town of Dahyan in Sa’ada, leaving at least 51 civilians people dead, including 40 children, and nearly 80 others injured.

The UNICEF, the United Nation’s children fund, called the carnage the single biggest attack on children in the ongoing Saudi war on Yemen.

Scores of Yemeni children rallied in the capital Sana’a on Sunday to decry the deadly invasion. Holding up signs and banners, the demonstrating youngster chanted slogans against the Saudi war coalition.

"We, the children of Yemen, demonstrate in pain and compassion, in solidarity with our brothers and sisters, mothers, fathers in the hurt region of Sa’ada, who suffered the worst harm at the hands of the attacker," said one young protester, addressing the demonstration.

According to Press TV, on Saturday, thousands of Yemenis rallied in the southwestern province of Dhamar’s capital of the same name, condemning the offensive.

Col. Turki al-Malki, a spokesman for the Saudi military, insisted that the attack was a "legitimate military action” as he accused the Houthis of recruiting children and using them in the battlefields.

Last week, Saudi attacks on a hospital and a fish market in the strategic port city of Hudaydah killed at least 55 civilians and wounded 170, according to the International Committee of the Red Cross.

Malki said the attack in Sa'ada came after Yemeni fighters fired a missile at the kingdom’s south, killing one person and wounding 11 others.

Tags: Yemen Saudi
Short Link rasanews.ir/201qDs
Share
0
Please type in your comments in English.
The comments that contain insults or libel to individuals, ethnicities, or contradictions with the laws of the country and religious teachings will not be disclosed