Rasa - The Saudi-led coalition has likely used a US-made bomb in its deadly airstrike on a bus carrying Yemeni schoolchildren, a local journalist reports, amid growing international criticism of Washington’s lucrative arms sales to the Riyadh regime and its allies. 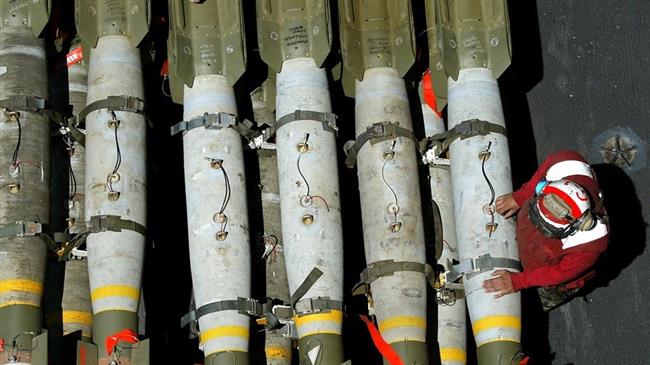 The remnants of the US bombs that killed Yemen children in the latest US-Saudi massare and war crime of August 9th, 2018
In Saada north Yemen. pic.twitter.com/z8bvadwncG
— Nasser Arrabyee (@narrabyee) August 11, 2018

The images have not been independently verified yet; however, this is not the first time that Mark 82 pieces have been found at the site of Saudi-led air raids against civilian targets since the onset of the military campaign in early 2015.

The MK-82, a 500-pound (227kg) bomb produced by American company General Dynamics, also made headlines when it used by Saudi warplanes in a 2016 attack on a funeral in the capital Sana’a. That attack claimed over 140 lives and injured 525 others.

Washington is a major exporter of arms to Saudi Arabia, but the Pentagon claimed last week that it might be impossible to tell where the bomb used in Thursday’s attack came from.

US Central Command spokesman Maj. Josh Jacques told Vox that “we may never know if the munition [used] was one that the US sold to them. We don’t have a lot of people on the ground.”

The US military said in early 2018 that the Central Command does not track how Riyadh uses Washington-supplied planes and munitions.

Defying pressure from human rights groups, the United States has continued to supply weapons to Saudi Arabia. President Donald Trump announced $110 billion worth of new arms sales to Riyadh back in 2017.

According to Press TV, a report in March by the Stockholm International Peace Research Institute (SIPRI) revealed the US had increased its arms sales by 25 percent over the past five years, with the Middle East serving as the destination for around half of those weapons. It also classified Saudi Arabia as the world’s second biggest arms importer.

The “beautiful” US-made military equipment, as referred to by President Trump, and a wide range of other arms provided to Saudi Arabia by Western powers, have paved the way for the regime and its coalition allies to massacre nearly 15,000 people in the course of the war.

The US-backed military offensive has also pushed the impoverished nation to the verge of starvation and destroyed the majority of its hospitals, bridges, schools, and other infrastructure.

Saudi Arabia and a number of its allies launched the war on Yemen in March 2015 to reinstate former Yemeni president Abd Rabbuh Mansour Hadi, a close ally of Riyadh, and eliminate its popular Houthi Ansarullah movement.

Tags: US Yemen Saudi
Short Link rasanews.ir/201qDp
Share
0
Please type in your comments in English.
The comments that contain insults or libel to individuals, ethnicities, or contradictions with the laws of the country and religious teachings will not be disclosed