Rasa - Israeli Prime Minister Benjamin Netanyahu says the flying of Palestinian flags at a protest rally against the controversial "Jewish state" law in Tel Aviv posed a threat to the existence of Israel. 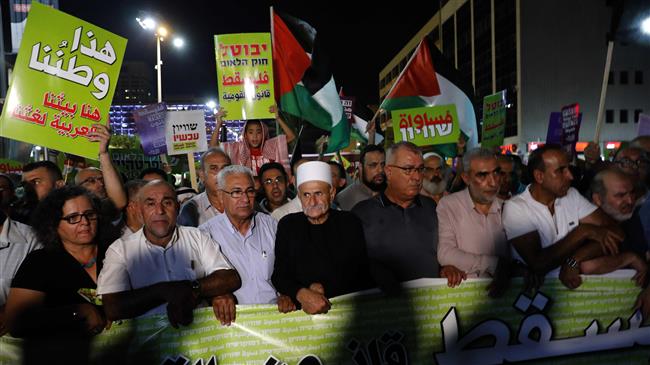 RNA - Tens of thousands of Arabs marched through Tel Aviv on Saturday, shouting 'Equality' and 'Apartheid will not pass' in Arabic and Hebrew and waving Palestinian flags in protest against the new law passed last month.

"Yesterday we received unequivocal evidence of defiance to the existence of Israel and the necessity of the Nation-State Law," Netanyahu said at a cabinet meeting on Sunday.

Arabs make up roughly a fifth of Israel's population of close to nine million and they have long complained of inequality and discrimination in their former homeland where they are treated as second-class citizens.

The new law adopted by the Israeli Knesset in July declares Israel exclusively for Jews, in what has been denounced as an "apartheid" an "racist" measure by many activists and political leaders around the world.

The legislation defines occupied Jerusalem al-Quds as the “capital” of Israel, downgrades the status of the Arabic language and encourages expansion of Israeli settlements.

On Saturday, a record number of Palestinians rallied in Tel Aviv after performing their evening prayers, chanting “We are not second class!” and carrying banners that read in both Arabic and Hebrew, “Nation-State Law - Official Apartheid.”

"Many of the demonstrators want to repeal the Law of Return; they want to abolish the anthem and the flag, and turn Israel into a Palestinian state. It's clearer now more than ever that the Nation-State Law is needed to ensure the future of Israel as a Jewish state," Netanyahu said.

According to Press TV, Saturday's rally was the second by Arabs in Israel since the adoption of the contentious law. Last month, hundreds of Arabs protested in the Mediterranean port city of Haifa to vent their anger at the measure.

A week earlier, tens of thousands of Israeli Druze gathered in central Tel Aviv to protest the controversial law. The protesters on August 4 accused the Tel Aviv regime of racism and discrimination against other ethnic communities.

Among world leaders, Turkey’s President Tayyip Erdogan has said the new law showed that Israel is “the most Zionist, fascist and racist" entity in the world, where the spirit of Adolf Hitler has re-emerged.

Erdogan said last month that Israel had shown itself to be a “terror” regime by attacking Palestinians with tanks and artillery, adding the move would “drown the region and world in blood and suffering.”

Tags: Netanyahu Israel
Short Link rasanews.ir/201qDn
Share
0
Please type in your comments in English.
The comments that contain insults or libel to individuals, ethnicities, or contradictions with the laws of the country and religious teachings will not be disclosed