Rasa - A court in Egypt has sentenced the chairman of the outlawed Muslim Brotherhood and other senior leaders of the movement to life in prison over charges of alleged incitement to murder and violence during protest rallies five years ago. 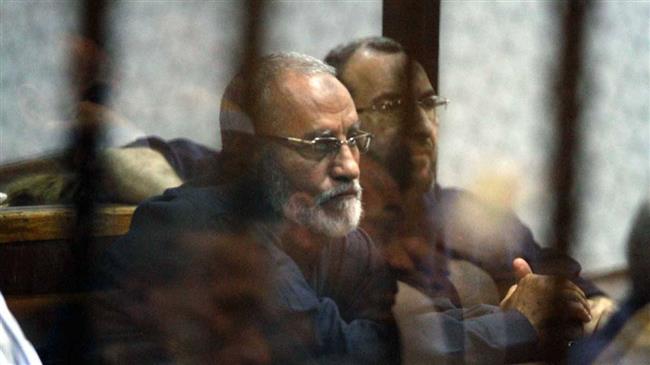 RNA - The Brotherhood’s Supreme Guide Mohamed Badie received life sentence from the Giza Criminal Court on Sunday, along with some other top leaders of the movement, including Mohamed el-Beltagy, Safwat Hegazy, Essam el-Erian and al-Husseini Antar.

The rulings are the latest among several trials and retrials against Badie and other senior leaders of the Brotherhood that ruled the African country before the military, led by incumbent President Abdel Fattah el-Sisi, ousted the first democratically-elected president, Mohamed Morsi, following mass protests in 2013.

The court on Sunday also sentenced Bassem Ouda, the former supply minister under Morsi's rule, to 15 years in jail. It also sentenced the movement’s prominent figures Hisham Kamel, Gamal Fathi, and Ahmed Dahi to 10 years in prison over charges of alleged incitement to commit violent acts in the protests.

All of the convicted leaders have the right to appeal the court ruling one final time.

Badie and the other defendants were convicted on July 15, 2013 of incitement to violence, including the killing of five protesters and injuring of 100 others during rallies in an area in Giza known as al-Bahr al-Azim.

The court had previously sentenced 15 people to life imprisonment in the al-Bahr al-Azim case in September 2014, but an appeals hearing had subsequently overturned the original ruling and ordered a retrial.

Late last month, an Egyptian criminal court referred the files of Badie and other Brotherhood leaders in a separate case to Grand Mufti Shawqi Allamis, Egypt’s most senior Muslim religious authority, for his opinion on whether they should be sentenced to death. At the time, the court set September 8 as the date of the final verdict for all the defendants involved.

According to Press TV, they were accused of taking part in an illegal protest and being involved in alleged murders during a sit-in held at Rabaa al-Adawiya Square in the capital Cairo in August 2013 in support of Morsi. The peaceful protest ended in the death of some 600 Brotherhood supporters and dozens of police officers when security forces violently dispersed the crowd.

Death penalties have been handed down to hundreds of Brotherhood members on charges such as belonging to an illegal organization or planning to carry out attacks.

Rights groups in Egypt and across the world have recorded cases of irregularities in the trials of political prisoners in the country. They say the army’s clampdown on the supporters of Morsi has led to the death of some 1,500 people and the arrest of 22,000 others, including 200 people who have been sentenced to death in mass trials.

The administration of Sisi has outlawed the Brotherhood organization, which is Egypt’s oldest opposition movement. The group operated under strict measures during the rule of longtime dictator Hosni Mubarak, who was himself removed from power following an uprising in 2011.

Morsi had been sentenced to death on charges of corruption, escaping from prison and inciting violence before the Court of Cassation overturned that ruling in November last year and ordered a retrial.

Tags: Muslim Brotherhood Egypt Brotherhood
Short Link rasanews.ir/201qDi
Share
0
Please type in your comments in English.
The comments that contain insults or libel to individuals, ethnicities, or contradictions with the laws of the country and religious teachings will not be disclosed