Yemeni Children Killed by US Bombs

Rasa - The bombs used by the Saudi-led coalition to attack a school bus carrying tens of Yemeni children in Sa'ada province was made in the US, an Ansarullah official stated on Sunday. 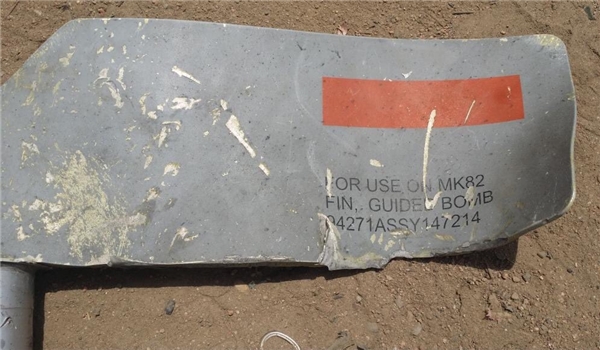 RNA - The official was quoted by the Arabic-language service of Russia Today as saying that the bombs were MK-82 which had earlier been used to pound a wedding ceremony in Hajjah province and a prison in al-Zaidiyeh.

Also, a tweet from renowned Yemeni journalist Nasser Arrabyee shows part of a 500-pound MK-82 bombs used in the bombing raid. The giant bomb is manufactured in the United States and sold in large numbers to both Saudi Arabia and the United Arab Emirates.

At least 30 children were among the people killed Thursday when their bus was struck by a missile fired from a warplane in northern Yemen.

The strike, in a busy market area in Northern Sa'ada has claimed the lives of over 50 civilians, many of them children between 10 and 13 years old, according to the International Committee of the Red Cross.

The attack was condemned by numerous international organizations and top officials, including UN Secretary General Antonio Guterres, who also called for a prompt investigation into the incident.

According to Fars News Agancy, the Saudi-led coalition on Friday promised that it would conduct an investigation. It had previously deflected criticism of the attack as a legitimate military action against the Ansarullah.

Tags: US Yemen Saudi
Short Link rasanews.ir/201qDh
Share
0
Please type in your comments in English.
The comments that contain insults or libel to individuals, ethnicities, or contradictions with the laws of the country and religious teachings will not be disclosed