Rasa - The Israeli army shot and killed a total of 167 Palestinians and injured over 18,000 others since the start of the Great Return March more than four months ago, the Health Ministry said on Saturday. 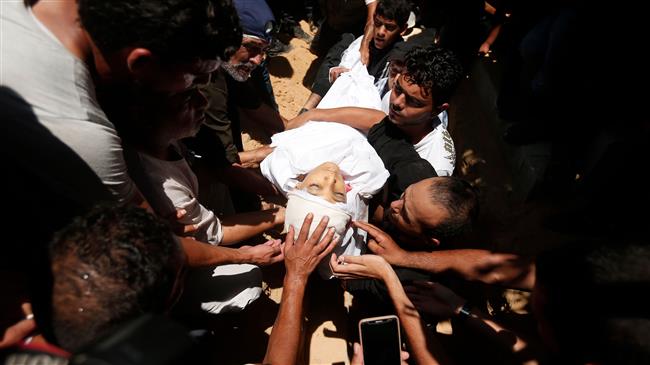 RNA - The new statistics came after three Palestinian civilians were gunned down by Israeli forces during the Gaza border protests on Friday, WAFA reported.

They included a medic, bringing the total number of medics Israeli forces have killed since March 30 to three, said the ministry.

It said that among the wounded, many from tear gas inhalation, 370 were medics. In addition, 70 ambulances were damaged.

The ministry said that the type of injuries caused on Friday show that the Israeli army shot directly at people with the intention to kill since the injuries were caused by various types of ammunition and aimed at sensitive and deadly parts of the body.

It said that among the 307 injured on Friday, 28 were children, five were medics and two were journalists. Five of the injured are still in critical condition, said the ministry.

Tags: Palestinian Israel Gaza
Short Link rasanews.ir/201qDT
Share
0
Please type in your comments in English.
The comments that contain insults or libel to individuals, ethnicities, or contradictions with the laws of the country and religious teachings will not be disclosed