Rasa - A Palestinian man, who was critically wounded by Israeli army gunfire during an anti-occupation protest along the border between the besieged Gaza Strip and the Israeli-occupied territories, has succumbed to his injuries. 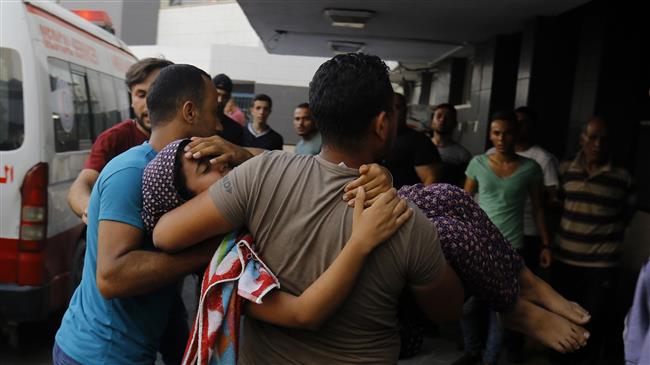 He had been shot and wounded in his pelvis during “The Great March of Return” protests east of the city of Rafah, located 30 kilometers south of Gaza City, on Friday.

Two other Palestinians, including a paramedic, also lost their lives and hundreds of others sustained injuries on Friday as Gazans protested in large numbers following deadly Israeli airstrikes and artillery shelling on the besieged costal enclave.

On Saturday afternoon, thousands of people took part in funeral processions for the three Palestinians.

The mourners carried the bodies of the slain Palestinians on their shoulders, and chanted slogans against the Tel Aviv regime and its brutal aggression against the impoverished sliver.

More than 160 Palestinians have been killed by Israeli forces ever since anti-occupation protest rallies began in the Gaza Strip on March 30.

A total of 14,811 Palestinians have also sustained injuries, of whom 366 are reportedly in critical condition.

According to Press TV, the Gaza clashes reached their peak on May 14, on the eve of the 70th anniversary of Nakba Day (Day of Catastrophe), which coincided this year with the US embassy relocation from Tel Aviv to occupied East Jerusalem al-Quds.

The resolution, which had been put forward on behalf of Arab and Muslim countries, garnered a strong majority of 120 votes in the 193-member assembly, with 8 votes against and 45 abstentions.

Tags: Palestinian Israel
Short Link rasanews.ir/201qDR
Share
0
Please type in your comments in English.
The comments that contain insults or libel to individuals, ethnicities, or contradictions with the laws of the country and religious teachings will not be disclosed