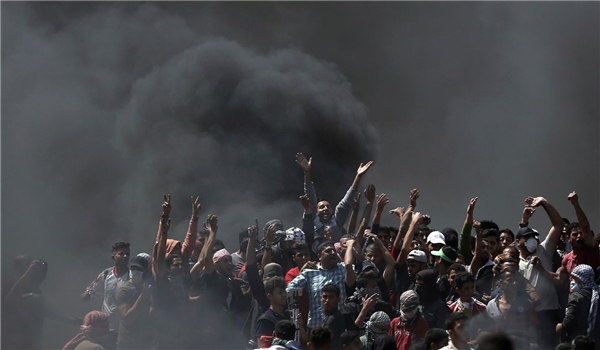 RNA - Israeli forces once again displayed its shoot-to-kill practice by targeting peaceful Palestinian protesters, including children in the upper parts of their bodies, he added, Palinfo reported.

During Friday protests, the IOF opened fire against crowds of unarmed protesters in the Gaza Strip, killing three Palestinians and injuring 307 others including 28 children through excessive, unnecessary, intentional, and premeditated use of force.

Five of the injured persons are still in critical condition, al-Qudra pointed out.

He stated that the Palestinian medical staff and journalists were directly and deliberately targeted during the protests despite wearing their internationally recognized protective emblems.

A Palestinian medic was killed by Israeli fire during protests along the Gaza border on Friday while five of his colleagues were injured. Two journalists were also shot and injured during the events.

Tags: Palestinian Israel
Short Link rasanews.ir/201qDO
Share
0
Please type in your comments in English.
The comments that contain insults or libel to individuals, ethnicities, or contradictions with the laws of the country and religious teachings will not be disclosed