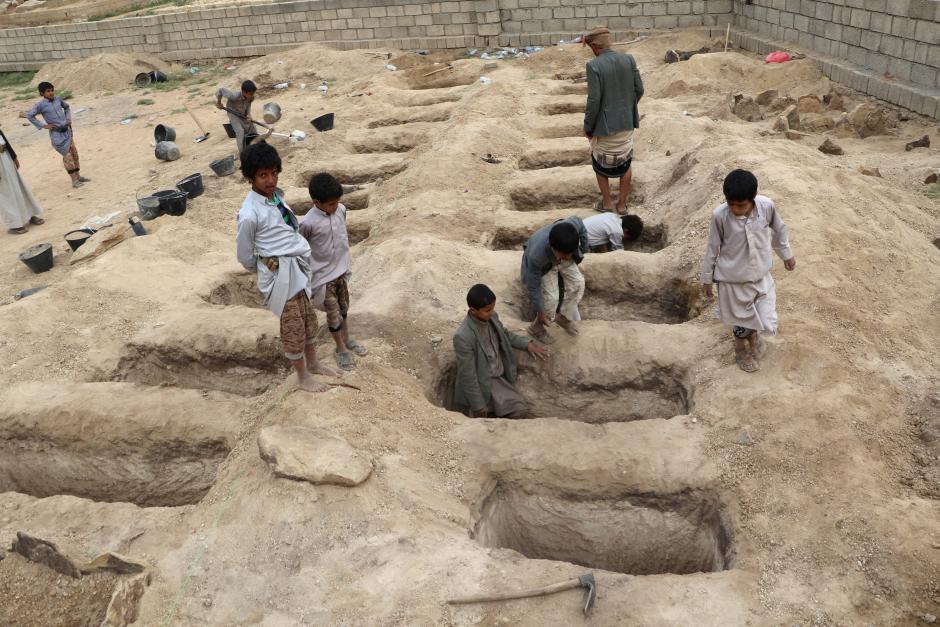 RNA - Those are the driver’s headaches, of course. Yemeni school bus drivers might even think it’s OK to tailgate, cut off a bus or take risks around a vehicle carrying as many as 50 children. After almost four years of war and occupation, however, the school bus drivers in Yemen have also added a new description – and a new lesson - to their jobs: A billion sorries are meaningless to parents who lost their precious bundles of joy and who are waiting in an emergency room with teary-eyed inquiries about their injured children after an airstrike by Saudi warplanes that hit their local school bus.

Sadly, on Thursday, August 9, that’s exactly what happened when Saudi warplanes attacked a school bus in northern Yemen, hitting the bus just as it was passing through a crowded marketplace. At least 50 civilians were killed in the attack, mostly schoolchildren, and 77 others were wounded.

Exact splits between children and people who were shopping at the market is not yet clear. The Red Cross, however, has confirmed that “scores” of children were killed, saying that most of the victims were under the age of 10. Reporters at the scene say it’s unclear why the bus was targeted, noting that there are no military installations anywhere near the market. They say this remote area of Sa’ada province has few hospitals, and the Saudi naval blockade has left them with no medicine, so the death toll is almost certain to rise.

It doesn’t take a strategic mind to realise why the Saudi warplanes targeted a busy market and a school bus. Saudi Arabia and its regional allies, backed by the United States and some NATO members, are not fighting the resistance group of Ansarullah. They are in fact fighting a besieged population of the poorest country in the Arab world. And the Thursday incident was just the tip of the iceberg, because the Saudi-led alliance have committed far worse crimes than the Thursday attack during their four-year military campaign of terror and occupation.

And no, this is not just a human rights violation. It’s a human rights nightmare. Although UNICEF has issued a statement condemning the attack on the busload of children, saying there could be “no excuses anymore,” and that the world shouldn’t need yet “more innocent children’s lives to stop the cruel war on children in Yemen,” the United Nations Security Council whose permanent member states include Saudi allies the United States, France and the United Kingdom will do nothing to end this human rights nightmare.

It gets worse when we hear how the Saudis have tried to defend the attack. Saudi Arabian spokesman Col. Turki al-Malki says the attack on the busload of children “was retaliation for a missile strike from the rebel Houthis. This made the attack a legitimate military action in accordance with international humanitarian law”!!!

Lest Col. Turki forgets, it was the Saudis and their allies who invaded Yemen and who have been bombing and violating the basic human rights of that country’s innocent civilians with Western weapons and bombs since March 2015. They are also the ones violating the International Humanitarian Law and not the defenseless people of Yemen. By being ignorant, Col. Turki cannot change this basic fact.

According to Press TV, he also cannot change the fact that the Saudis and their allies are no strangers to killing scores of Yemeni children in airstrikes with no apparent military goal, and expressing comfort in that fact. At the same time, he cannot ignore the growing international outcry, as well as fury among Yemenis about Saudi Arabia’s criminal actions. The fact that this was a high-profile deliberate attack scattering the bodies of children across a crowded market is only going to make things worse.

At any rate, those who weaponize the Saudis and support their indiscriminate airstrikes are complicit in the current human rights nightmare in Yemen. The US, UK and France should hold their heads in shame because Saudi Arabia uses their bombs and warplanes to target civilian objects in Yemen. That the US, UK and France refuel planes like the ones that attacked the school bus on Thursday is also beyond dispute.

Tragic enough, many parents in northern Yemen will never see their kids return home from school on their bus anymore. Those wishing to protest this should condemn the Saudis and their allies for bombing Yemeni children. They should also call on the US, UK and France to stop selling weapons to Saudi Arabia. Without the West’s much-needed military and diplomatic support at the UN, the Saudis cannot and will not be able to continue their human rights nightmare and strike any other school bus in Yemen.

Tags: Yemen Saudi
Short Link rasanews.ir/201qDL
Share
0
Please type in your comments in English.
The comments that contain insults or libel to individuals, ethnicities, or contradictions with the laws of the country and religious teachings will not be disclosed