Rasa - In yet another new low for the United Nations, Israel has been elected to head a permanent committee at the upcoming General Assembly, despite intense efforts by Arab and Muslim states to stop the controversial nomination. 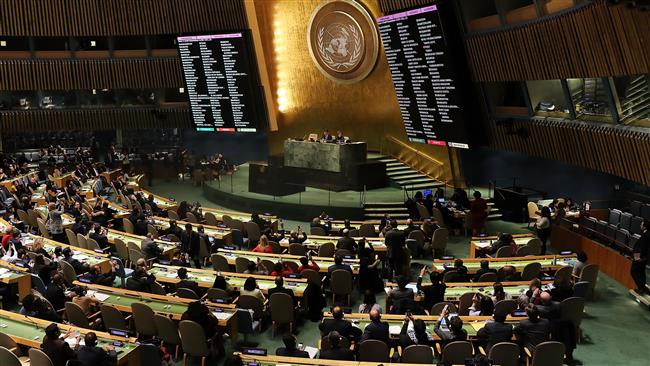 RNA - In a secret ballot Monday in New York, Israel’s Ambassador to the UN Danny Danon was elected chairman of the GA’s Sixth Committee, which deals with legal issues. Among the issues it is expected to deal with at this fall’s GA are “measures to eliminate international terrorism,” and “the rule of law at the national and international levels.”

The move is a mockery of international legal system. Rewarding Israel for its flagrant violations of International Law and acts of collective punishment and violence also defies logic:

- According to CIA and cyber-security agents invovled in the operation, Israel and the US ran a joint cyberattack to sabotage Iran's infrastructures, including its nuclear facilities, with the Stuxnet virus.

- The usurper regime continues to breach International Law and conventions, International Humanitarian Law and countless UN resolutions. Being nominated to head a legal committee that aims to promote international law and protect basic human rights and freedoms will only give a new lease of life to Israel’s apartheid policies and plans. It will only embolden the regime.

- It just does not make sense for Israel to chair the GA’s legal committee as long as the regime continues to violate the Palestinians’ basic rights, build illegal settlement units on occupied lands, and impose a blockade on Gaza that has been going on for years. This nomination encourages Israel to continue its terrorist policies against the Palestinian people as well.

- This is a huge blow to the UN and its anti-terrorism rules and bylaws. This is because Israel continues to aid and abet the terrorist groups of ISIL and Al-Qaeda in Syria. Israel has long provided medical treatment to the Nusra Front and Al-Qaeda fighters wounded in the ongoing war on Syria. The Al-Qaeda offshoot never bothered Israel all throughout the years that it was in control of some border areas along the Golan Heights until last month when it was defeated by the Syrian army. This should give the UN some basis to think who is really backing the death cults in the region.

- The UN has already published numerous reports criticizing Israel for imposing an apartheid regime of racial discrimination on the Palestinian people. These reports have concluded that "Israel has established an apartheid regime that dominates the Palestinian people as a whole." These reports reflect the views of the international community and for this reason alone Israel shouldn’t be allowed to have the final say on legal matters discussed and ratified at the UN General Assembly. The GA should distance itself from Israel.

- Israel claims to be the only true democracy in the Middle East. If that’s really the case, then how come the regime’s parliament recently passed a controversial law characterizing the country as principally a Jewish state, fueling anger among its Arab majority and the rest of the international community? The so-called "nation state" law says Jews have a unique right to national self-determination in the Holy Land and puts Hebrew above Arabic as the official language. Simply put, with this law, the regime will never bother to respect the rights of all its citizens. It will continue to exist as a racist and undemocratic entity.

According to Fars News Agancy, Considering the above and reading the tea leaves, it should be clear by now that by electing Danon as chairman, the GA’s Sixth Committee cannot and won’t be able to deal with legal issues, in particular, when it comes to measures to eliminate international terrorism and establish the rule of law at the national and international levels.

A regime that violates International Law and International Humanitarian Law, assassinates civilians of other states, backs terrorist groups, launches cyber terrorism against world countries, steals lands and attacks its neighbors cannot and won’t be able to bolster the ability of United Nations Member States to prevent terrorist acts both within their borders and across regions. On the contrary, the move is encouraging For that reason and no other, the UN must retract its move.

Tags: UN Israel
Short Link rasanews.ir/201qDJ
Share
0
Please type in your comments in English.
The comments that contain insults or libel to individuals, ethnicities, or contradictions with the laws of the country and religious teachings will not be disclosed