Rasa - Israeli invaders use Palestinian retaliatory rocket attacks as an excuse to carry on their "slow genocide" in Palestine, says a commentator. 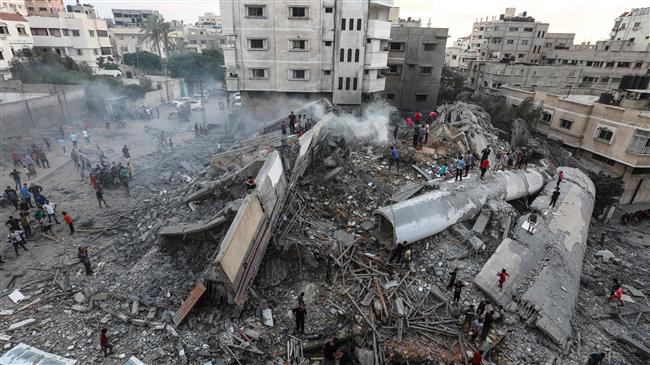 RNA - “It (the wave of retaliatory rocket attacks from the Gaza Strip) is clearly an excuse for slow genocide ... of a people who have done nothing wrong,” James Thring, peace advocate and political commentator, said on Friday.

The Israeli military has carried out over 140 strikes against the Gaza Strip in less than 24 hours. The attacks began on Wednesday night and continued into Thursday morning.

“The Israelis are simply greedy and want their (Palestinians’) land, they also make an industry out of fear pretending that these innocent and undefended and unarmed people are a threat,” Thring said.

“It’s unbelievable that ... any human-being could behave so cruelly and disproportionately unjustly against innocent undefended people, who in any case have got more rights to be where they are than the invaders coming from Europe, Russia and America,” the analyst argued.

Tel Aviv has threatened a full-scale military offensive against Gaza, which has been under Israel’s all-out siege since 2007 and witnessed three wars since 2008. Palestinian officials later said the resistance movement Hamas and Israel agreed on a truce to prevent any further escalation.

Tensions have been running high near the Gaza fence since March 30, which marked the start of a series of protests demanding the right of return for Palestinians driven out of their homeland.

Tags: Genocide Israel Gaza
Short Link rasanews.ir/201qDH
Share
0
Please type in your comments in English.
The comments that contain insults or libel to individuals, ethnicities, or contradictions with the laws of the country and religious teachings will not be disclosed